Why We Must Stop Saying, “It’s What’s on the Inside that Counts”

It’s what’s on the inside that counts. -Everyone

I distinctly remember how I felt when someone told me, “It’s on the inside that counts.”

All through my teens and twenties, I wanted to care less about my weight or my skin or my hair. But, I didn’t know how to stop. I felt like a mis-programmed computer. What was wrong with me that I couldn’t stop thinking about how I looked?

Now, when I speak to groups, I start by sharing some relevant data about women and body image. We do a fun “exercise” so that every woman in the room knows she’s not the only one to struggle. By the end of the first five minutes almost all of the ladies agree that this body image issue is one that affects us all.

But then, I surprise them!

I ask if there is anyone who has not heard the statement, “It’s what’s on the inside that counts?” I press in, encouraging everyone unfamiliar with that phrase to raise their hands.

I’ve never seen so much as a pinky lifted.

We’ve all heard it. We all know it. We just don’t believe it. So, it doesn’t help!

Why do we keep saying it?

Why do we keep telling it to our daughters, our friends?

I think it’s because we don’t know what else to say. We don’t have a good substitute, so we stick with cliche.

But really, aside from its ineffectiveness. What’s so bad about saying, “It’s what’s on the inside that counts?”

I think I know.

The book of Samuel tells us that God looks on the inside, this is how he judges a man. David was nothing to look at, yet, God chose him to be king because of his heart. It’s true. What our hearts look like is of far greater importance than having symmetrical facial features or a thigh gap.

Yet, we wrestle to believe it because we aren’t convinced that more physical beauty won’t, in some way, lead to more happiness. Just like we know that money won’t make us happy, we wouldn’t mind having someone give us a million dollars… you know, just to make sure it doesn’t work. (I’ve written about this a lot here, and here…) 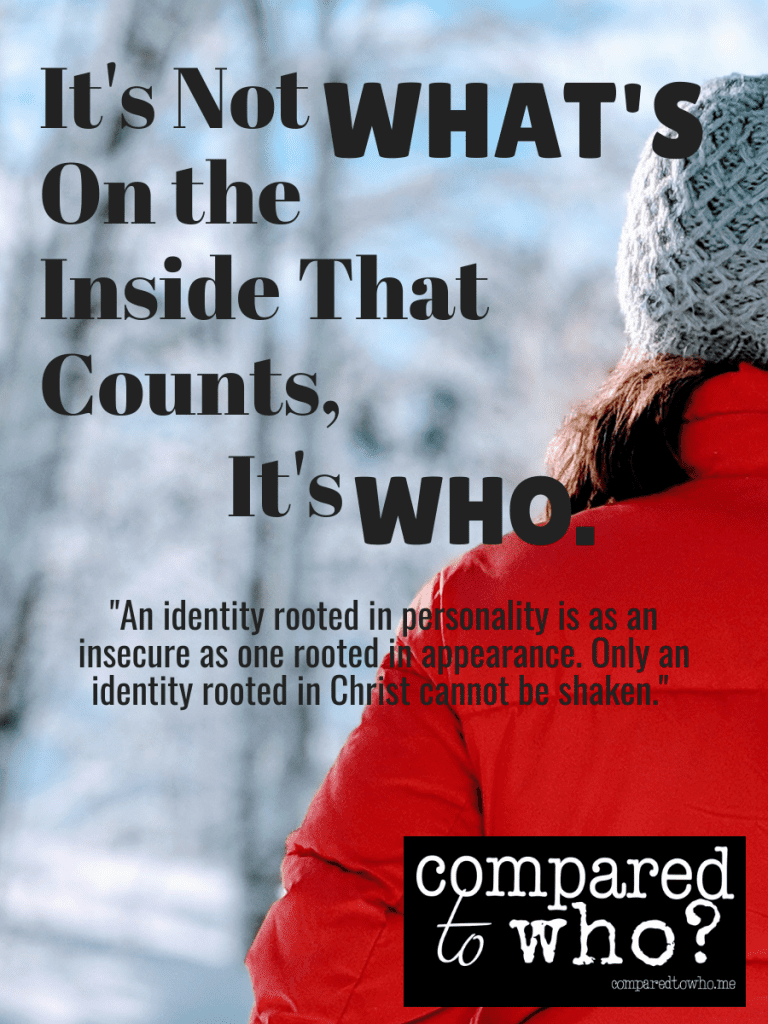 But, my real problem with the liberal use of “It’s what’s on the inside that counts?” is it keeps the focus on us.

This statement inherently asks the one questioning their value to deflect their pride, not suffocate it. We encourage women to remember how awesome they are–how talented they are at sports, music, or art; how kind and thoughtful they are.

“Focus on what’s great about you…on the inside…and then you won’t care about that extra ten pounds.”

In this one simple phrase we deliver a message that the Bible doesn’t: If you are good deep down, that’s what’s important.

I don’t think that’s what God meant when he said he examines our hearts.

I won the wrestling match with my body image only after I was able to practice self-forgetfulness. Funny, but I never found freedom while trying to think about all that was fabulous about me. I didn’t know who I was because I didn’t know whose I was.

My identity in Christ was shaky at best because I spent more time trying to figure me out than getting to know Him.

You see friends, I believe it’s not what’s on the inside that counts. It’s who.

In other words, our value shouldn’t be derived from all the “good” we perceive to be inside of us, any more than it should be rooted in shiny hair or a great figure. When the Holy Spirit inhabits us we are to be free from chasing all vain pursuits to find self-worth — be it chasing money, success, goodness, or beauty. This includes our own awesomeness.

We are best able to serve Him when we are emptied of ourselves, not full.

Do you tell people (your children even?), it’s what’s on the inside that counts?