Success Stories and My Story

In the fitness world we refer to the story of how someone went from being unhealthy, overweight or out of shape to healthy and fit as a “success story.” In the church we also have a success story equivalent. We refer to how someone has changed their life spiritually as their testimony.

I’ll be honest. I’ve claimed to be a Christian my entire life, but I didn’t have a total transformation until a few years ago. To paraphrase:  I was really just a nice person who was a “little nicer” because I went to church. (I blogged more about what I call “Coffee-mate Christians” here.)

I never really felt like I had much of a testimony.

Sadly, I now recognize that this was symptomatic of the fact that I never really had a deep relationship with Jesus Christ.

Raised in the church, I said the “sinner’s prayer” at age 3 (and dozens of times a year for decades after that). I was moral. The latter is, in part, what I felt prevented me from having a testimony people would get excited about. What I witnessed as a child was people who would stand up and share amazing stories of deliverance from drugs, alcohol, sex or other addictions. It seemed to me like their transformations were the most “incredible” because (I was certain) it was hard to change in those areas.

I never used drugs. Never drank. And didn’t have sex before I got married (although, I’m remorseful to admit, holiness was hardly my pre-marital standard). So, what did I have to stand up and share? Who would “ooooh” and “ahhhh” at God’s grace in saving me from my habit of stealing candy from my grandfather’s stash or making long distance phone calls without my parents’ permission?

I could tell you a lot about the Bible having gone to a Christian high school, college, and even graduate school. I firmly believed my morality was my “witness.” People would see the amazing way I abstained and become a “Christian like me.”

Yet I didn’t see that happen. Ever. In fact, on the few occasions I shared Jesus with people, they didn’t bite. Probably because I wasn’t really sharing the Jesus of the Bible. I was sharing a morality-focused deity that I had created. One that cared a lot about not committing certain sins and would help make their life better if they said a prayer to him. (If the term moralistic deism is not in your vocabulary, watch this video by Matt Chandler.)

Well, Jesus showed me I really was a sinner. Then, and only then, was I able to need him as a savior.

Because an over emphasis on morality was such a large part of what I took away from my childhood years in the church, if I’m honest I’d have to admit that I didn’t really see myself as a sinner. I’d hear hymns that cried, “such a wretch as I” and think, “Hmmm. . . wretch? Yeah, that’s not me.”

I couldn’t recognize that I was full of pride, self-righteousness, and selfishness (among other things!). I was a Pharisee. Not a disciple of Jesus, instead, I was religious–a good “Christian” who didn’t know Christ because I didn’t really need him to save me. 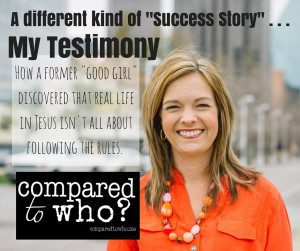 Yes, I needed (wanted) him to help me when I was in trouble, give me things, provide for me. But, I didn’t need a savior. Eternity was far away and (I felt) my record was clean, I chanted the magic words enough times, so deep down I figured I was all set. (If you think you are set for eternity just because you chanted the magic words too, listen to this sermon by my favorite pastor.)

My version of Christianity didn’t take a lot of “work” because I didn’t struggle with moral temptation much. Morality is all I knew. Since I lived my life mostly in a Christian bubble, it’s what my friends knew too. I read things in the Bible like, “come and die,” but thought that was a bit overstated. It didn’t feel like “not drinking” required any amount of effort to be equated with death.

I bobbed down and up between what I thought were spiritual “mountain tops” and “valleys.” (I learned about these in church). I prayed a lot when I was in trouble or depressed and read the Bible for what I wanted to see. Secretly, I wished I could be more, “on fire for God.” (I really thought people that were that way were great.) But, I didn’t know how to do it in a way that would stick. I tried and I tried. But, it never felt sincere.

Since most of my friends weren’t really “on fire” either, I didn’t worry about it too much. I figured I was probably okay. . . just “normal.”

What did I spend my time thinking about? Well, mostly myself.

I thought about my weight, a lot. My overall appearance, just as much. I constantly wondered whether or not people liked me. Thoughts of whether or not I was good enough, smart enough, pretty enough, successful enough, or working hard enough consumed me.

I wondered if I was doing enough to be approved and accepted by everyone–God included. (He wasn’t my first concern because I thought I covered that base). Honestly, I didn’t have a lot of extra brain capacity to love others or to think about their concerns, because I was pretty busy thinking about how I needed to make myself better.

But, God, in his grace, over the past few years has allowed me to see my sin. He revealed to me that his standard is holiness. I can’t measure up on my own. Through his Word he’s shown me all the sins that I didn’t even know I struggled with. (Don’t hear gluttony preached on much, do you? But, I know I’m guilty and yes, it’s actually just as much of a sin as the so-called “big ones”). All my previous notions that being a Christian meant good church attendance, working in the nursery, and telling my boyfriend to keep his pants on have broken down. He’s freed me from the responsibility to make myself “good enough” to be accepted.

There was a saying when I was growing up that went something along the lines of, “I don’t smoke, drink or chew or associate with those that do.” This was some sort of sign of a good Christian. Now, this makes me sad. This is so contrary to what the Bible says makes a person a Christian. In fact, Jesus was more likely to hang out with someone who was bogged down with moral failures than a Pharisee like me.

No where in the Bible does is say it’s ok to be a “regular” Christian, or a Christian that lacks fire. In fact, God only has not-so-great promises for those who are lukewarm (Church at Laodecia is “spewed from his mouth”). Jesus called people to follow him with a reckless abandon. To leave their families, leave their possessions, to forget it all and go forward with him. This doesn’t sound halfway to me. This sounds radical. 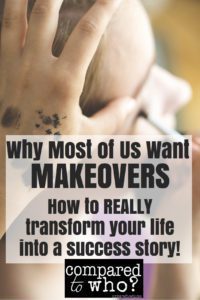 The Gospel Transforms Us

Now, God is showing me that the Gospel of Jesus Christ is more extreme than I ever realized. He’s revealing to me that it’s a (as Francis Chan puts it) CRAZY love that would send a son to die for me. Jesus dying on the cross isn’t a “tragic story.” It’s not an “interesting tenant of my faith” that I recite an allegiance to and then move on with my life. No. That story — the Gospel– is what transforms us. Church doesn’t. Clean living doesn’t. Being nice doesn’t. It’s Jesus dying on the cross and trying to comprehend how much God loves us that will change us. It’s understanding that because he loves us we are accepted and that we don’t have to work for that acceptance, that frees us.

Then, taking that next step, deciding to follow the God who shows us that kind of grace and love, isn’t a step that can be taken lightly or that makes our lives go from “ok” to “good.” The Bible uses the term born again because it’s like starting new. It’s not taking a shower to feel a “little” cleaner, it’s re-birth–starting life again as a disciple of Christ that makes you a Christian. It’s not a hidden matter of the heart. It should be obvious to people that you are changed. Your priorities are different. The things that make your heart respond (what you laugh at and what you weep over) are not the status quo.

If you are truly a Christian, you will be different.

If your world hasn’t been rocked by Jesus, yet you call yourself a Christian (like I did) I hope you’ll do some soul searching. I’m here for questions and comments too.

Woe to you, scribes and Pharisees, hypocrites! For you are like whitewashed tombs, which outwardly appear beautiful, but within are full of dead people’s bones and all uncleanness. Matthew 23:27

Can you relate? Follow this blog for more encouragement every week. Or, check out my new book called “Compared to Who?” I think you’ll like it! 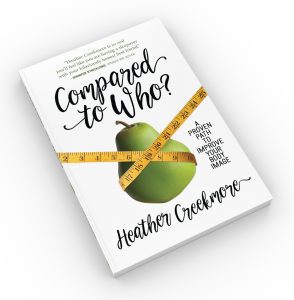