When my brother and I were in elementary school, we looked forward to one reward for cooperating during a grocery store trip. A donut.

For me, it was Boston Cream-filled–the top covered in chocolate and the middle oozing with a creamy, pudding like deliciousness. Meanwhile, my brother always chose a bland, glazed variety. A waste of a good donut in my opinion.

These days, donuts are one of those foods that I can take or leave, though the cake variety tempt me most. I can usually walk right by the donut table at church unless someone throws some red velvet donuts into that box. Then, it becomes a battle.

For we wrestle not against flesh and blood, but against donuts, M&Ms, and French fries from the drive thru…

That’s not how the verse actually reads of course. But, if you’ve ever been on a diet it can seem like the battle to resist temptation is overwhelming. You can visualize the back-and-forth between the little angel resting on your left shoulder who says, “You don’t need that, Dear. Here eat some carrots.” and the little devil camped out on your right side saying, “Go ahead. Dig in. You deserve it. It’ll make you feel good. You can always start again tomorrow.”

Especially if your main motivation is to look like a magazine cover.

I remember decades ago in the heyday of my dieting years, experts would suggest cutting out a picture of the woman whose body you wanted to emulate and sticking that picture on your refrigerator. Nowadays the experts probably tell you to just pin those images. I see the incredibly sculpted abs, legs and arms photos go by in my Pinterest feed daily.

But they don’t help me. The picture of Cindy Crawford on my fridge in the 90s never helped me either. The problem with cover models as inspiration is that they spur you to victory for about two days…and then you get hungry. You suddenly remember that they are all air-brushed anyway…so, you might as well eat the Snickers.

And, then, as you take the last bite and throw away the wrapper, you daydream about inventing a way that Snickers bars would make you skinnier.

Losing weight is hard. It’s a mental and emotional battle to break a food dependency. To call it anything less than that minimizes the dieter’s legitimate struggle.

If your battle against the scales is for health reasons, then I want to encourage you to not give up. You can do it! And what I’m about to say will help you. I promise.

But, take heart. If it’s hard, if you feel like you’ve failed.

You need to know something: You really aren’t wrestling donuts.

The battle of the belly bulge isn’t really any different than the other temptations and trials we face in life. And, Paul’s words in the butchered Bible verse above — from Ephesians 6 — really can apply to the dieter’s plight. We don’t wrestle against flesh and blood. We wrestle darkness.

All of our battles are spiritual. Even your weight battle.

Or, this is the big one, have you ever noticed how easy it is to stay on a diet when things are going well…but how hard it is to stick to your calorie limit when you are stressed or frustrated?

My friends…Dieting is a spiritual battle and if you answered yes to any of the above questions, you proved my point.

Then make your focus the Gospel of Jesus Christ. Spend time each day meditating on scriptures that reiterate how much you are loved and valued. Focus on the savior that thought you were important enough to die for. Our church is encouraging everyone to spend the first fifteen minutes of every single day in God’s word and prayer.

During my chronic dieting days I know I spent at least 15 minutes a day studying my food guides and calculating my calories. But, rarely did I spend this kind of quality time with the one who made my body and who knew where my real struggle was rooted.

I’m not saying throw away your food and exercise plan and go back to eating Cheetos and cookie dough for dinner. God wants us to be good stewards of the bodies that he gave us and feeding them well is part of that.

Generally, I don’t encourage women to diet. I think that God’s plan is for us to have a grace-filled relationship with food, where moderation is key and recognition of gluttony helps us not eat more than we need to. Yet, I also understand that sometimes you have to lose weight. In some cases the doctor has said, get this done…get this weight off. And, that’s a difficult and daunting challenge. And guess what, there’s hope for dieters, too. God can help you find freedom!

I want to encourage you that if the climb to your weight loss goal feels like you’re scaling Everest, then stop looking at it through physical eyes. You aren’t wrestling the donuts; you are in a spiritual battle. Spending more time with Him, reading His Word and embracing His love for you will help you better than any Weight Watchers meeting ever can. You need His power and His strength to get this done. 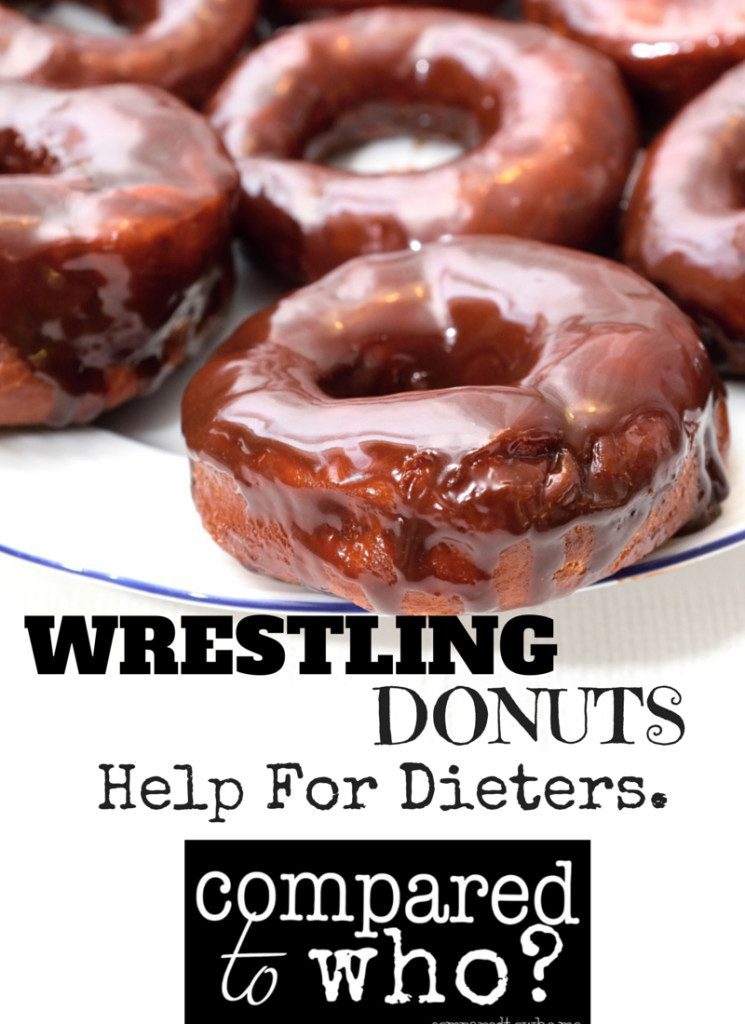