His Lust Problem Is Not About You

Sixteen: the number of days it had been since I checked my work email. But between the wedding, a cross-country move, and our honeymoon, time hadn’t permitted me the luxury.

Today I would have to face reality.

I opened my new husband’s laptop. My computer and the rest of my furniture hadn’t arrived at our new home in California yet, so we’d have to share. I waited while it booted up and entered his password to log on. I clicked the internet icon and. . . nothing. I clicked it fourteen more times. Same results.

“Babe, it won’t work!” I shouted from across the house. “The internet won’t connect.”

“Just a second, I’ll fix it.” He came and clicked on a little eyelid icon and put in yet another name and password.

I spent a lot of time on computers, but that was an icon I had never seen before.

“It’s accountability software.” He said in a very matter-of-fact tone.

Stumped, I responded, “Accountability for what?”

He looked me in the eyes this time. I still didn’t really understand what was happening. All I knew was that it was annoying to have to use someone else’s computer and even more annoying to not be able to easily log on to said computer.

We were about to have a life-changing conversation about his lust problem and I was only half aware of it.

“It tracks everything I look at on the internet. It’s called Covenant Eyes. It sends a report to Dave so we can keep each other accountable.”

Back up the bus!

Could he be saying what I thought he was saying? He struggled with looking at “things” he shouldn’t on the computer. No, wait. What????? Did this mean he wrestled with . . .

This couldn’t be happening to me. Not on the day we returned from our honeymoon. Not two weeks into marriage. Not to me. Period. My husband could not have a lust problem!?

I didn’t marry a man who struggled with lust. Surely I would have known about that before we got married. That should have come up in counseling or something. Was that what he meant? I had to ask the question. But, I didn’t really want to know the answer.

Gulping hard, I let the words out.

I felt my fragile new marriage and even more tender sense-of-self crumble as he confessed to a decades-long struggle. He was exposed to the poison early and, although he wanted to be free from its toxicity, it was sometimes a battle. He explained that though it was getting better, it wasn’t a switch he could flip off. As my tears started to fall, the speed at which his words came slowed to a complete stop.

I didn’t know what to say. How could I not have known this before?

I left the house. Immediately. It’s the only time I ever left during a discussion of any kind. I had to. I couldn’t breathe and had no idea what to do. You don’t exactly call your mom and tell her about this lust problem. I felt weird telling friends. What would they say anyway? They probably never had to deal with this. . .

I returned after an hour or so to find my husband kneeling on the floor in our bedroom. A song by Third Day was blaring loud and there were tear stains on his face. “I’m sorry,” he said. “I’m so sorry.”

I knew he meant it. What I didn’t know was how I could handle this.

It’s More Common Than You Know

With all my heart I wish that my experience was rare. I wish the data on pornography use was exaggerated. And, more so, I wish, so, so much, that the temptation luring our men away wasn’t so prevalent. Why does virtual sex-on-a-platter have to be so easy to access? Why does a lust problem have to be so common?

I’d like to tell you that the conversation above is the only one we ever had on the topic and my husband’s instant healing has kept him from struggling through today. But, that wouldn’t be true. Thanks to healthy practices and great accountability software, we’ve been able to keep the worst of the worst at bay. But, scantily clad women permeate our culture and old thought patterns are hard to break.

You see, it’s his struggle. It’s his sin. But, it’s our marriage. And, if there’s one thing I’ve learned about this lust problem and the fight against it, unless I get in it, he will lose.

There are four things I want you to know if your husband is battling the lust beast.

1. This has nothing to do with you and how you look.

His lust problem is not about you. He isn’t looking because you aren’t enough. I want you to use a Sharpie and write that on your arm if you have to. Believe it. Please, believe it. His struggle goes far deeper than a sort of your body versus her body comparison game. The faster you can accept this to be true, the sooner you will be able to actually help him deal with his sin in a healthy way.

Please don’t try to become like those women. Please don’t look to see what those women look like (out of curiosity). And, please don’t run out and get boudoir photos taken because, “If he wants sexy pictures they should be of you.” That’s not what this is about. At all. Objectifying yourself is not the way to help him be free. 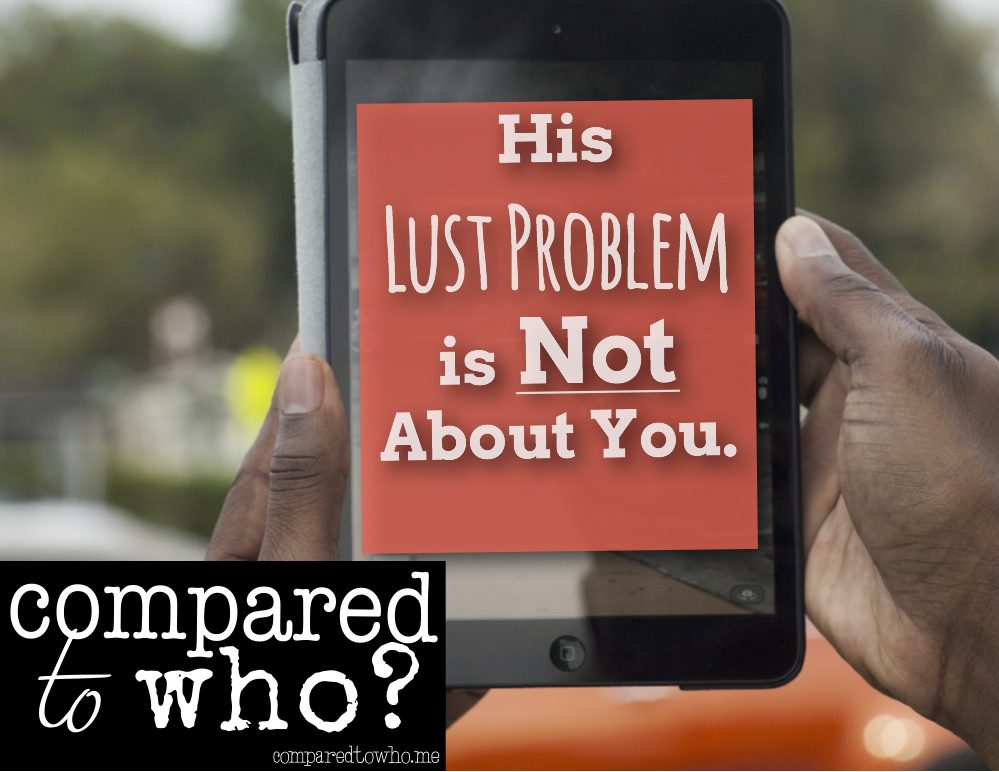 During my husband’s earliest confessions with his lust problem, I was anything but on his team. I was against him. We weren’t teammates. I was mad. How could he betray me like this? I called him an adulterer and then stomped away on more than one occasion. And he would say, “Why can’t you be on my team?” I didn’t know what that even meant.

Now, I do. I realize that if we are going to overcome this, he needs my help. That doesn’t mean that I can’t react, feel betrayed or hurt. But, it does mean that I can offer him grace for his struggle. I have to see his sin for what it is: sin. Then, recognize that I have a sin problem, too. Not in the same arena perhaps, but his transgressions aren’t uglier than mine, they are just different transgressions. It is only when you see yourself as just as broken and as equally in need of a savior can you really empathize with him.

I know, you’d rather not talk about it. Part of you just doesn’t want to know about his lust problem. But, that doesn’t make it better. Secrets kept in the dark fester and then grow. Issues brought to the light are exposed and can be healed. Tell him you’ll do your best to react with grace, but that you need to know when he’s struggling. Then pray for him. Don’t withhold sex or punish him for hurting you again. Instead, pray that Jesus would bring him to repentance and that God will use this to grow both of you. I know this will be hard. But, I promise it will help.

I know it feels dark and cold and lonely to deal with this issue. You may feel like your relationship is over or there is no way you’ll survive this. Allow me to encourage you: do not give up. There are countless stories of marriages that have survived porn and lust battles of every kind. There is great hope for your marriage too. See a Biblical counselor, talk to someone at your church whom you trust, and daily seek God’s face for help. You will feel too weak to handle it and that’s because you are. But, He is not. There is great hope for your marriage to come out stronger on the other side of this lust problem if you don’t give up.

Friend, it’s been more than a decade since we’ve had to even have a conversation about these temptations. There is great hope for your husband too.

I don’t take this topic lightly. I counsel women on it regularly and my heart hurts each time I hear another story. But, then I’m reminded of the truth of God’s word.

He redeems us out of our sinful state… no matter how long you’ve been battling this lust problem.

He does the same for our marriages. If this is your battle today, here is my prayer for you:

Dear Heavenly Father, I pray for my friend who feels uncertain right now. Maybe she feels betrayed by lustful habits carried out in the dark that she never knew about, or perhaps she’s still reeling from a confession of harmful behaviors. Whatever the case may be, I pray that you comfort your daughter. That you let her know and help her believe that this isn’t about her, her appearance or her value.

Help her to be a good helpmate to him even through this struggle that is so hard for us women to fully understand. Help her to be on his team and to, above all else, not give up on their marriage. Show her their greatest hope is still found in you. You aren’t defeated by lust and neither should they be. Strengthen my sister to be bold and brave as she walks alongside her husband through this battle. In Jesus’ name, Amen.

**I write more about this topic in my book “Compared to Who?” If you’ve ever wondered if you are “enough” for your husband, I hope you’ll read it! (Affiliate link) 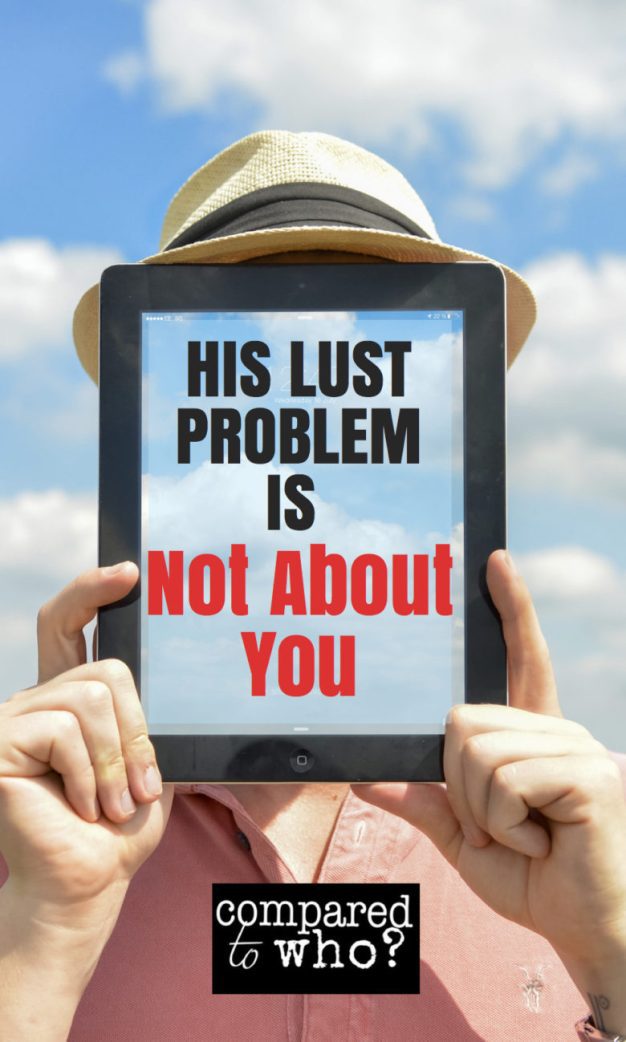