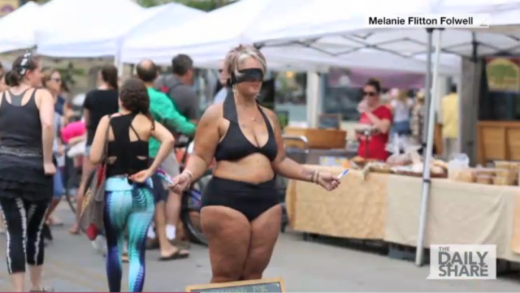 It’s likely you saw it—the viral video of the woman who stripped down to her black bra and underwear and, using only a chalkboard sign, asked people to show their support for body acceptance by drawing a heart somewhere on her body.

Here’s the video of woman they drew hearts on:

Moving to watch? Sure. To see people, young and old, affirm this woman was nice. How could one not get a case of the warm fuzzies?

Call me stoic, but I didn’t. I don’t think there’s anything awful about what she did. And, I’m glad people were kind to her. I just wish we’d stop thinking that having other people affirm us, no matter what our size, is the answer to our body image issues.

You see, Amy wasn’t actually the first one to do this. A few weeks before Amy’s daring move, a young woman in England did the exact same thing. Watch it here:

But there are two things about these types of videos that trouble me.

First: I feel like this method of promoting body acceptance keeps our focus in the wrong place—on our bodies!

Stripping-down to get others to accept us seems to prove a point many of us would rather refute. That is, our value is associated with the way our bodies look. By exposing our bodies and then asking for other people to accept them—in the way that both Jae and Amy did in these videos—aren’t we just perpetuating this myth?

If we really want to be counted for who we are on the inside, and not on the outside, how would showing more of our outsides contribute to that goal?

I wonder how different these videos would look if Jae or Amy looked more like my friend Kari—five foot, ten inches, and 110 pounds give or take a few. She’s built like a model. What would the women passing by have thought about having a magazine-cover-worthy body in bra and underwear in the middle of the busy market? Would they draw hearts? Or, would they whisper behind her back, cover their husbands’ eyes and hope she’d put some clothes on? How would we have felt watching a strange man hug her in her underwear, like that man did for Amy?

Our body image issues have so little to do with what we actually look like that I think these “experiments” are futile. I know women who are universally considered beautiful (like Kari) who have people tell them that every single day. Still, they struggle with their value—they strive to look better, to really feel accepted.

Yes, it certainly required inner strength for both of these women to strip down publicly. But, this is not the kind of courage that we need to actually defeat our body image issues.

Self-acceptance sounds desirable. Having others affirm us seems good, too. Yet, what we really need is the courage to derive our affirmation from elsewhere—to, not be overly concerned with what we think of ourselves or what other’s think of us.

And, that’s my next gripe with these videos.

Second: They distract us from focus on where TRUE affirmation comes from.

Yes, it’s wonderful that all those people show their acceptance of these women. But, let’s get real. People are fickle.

Drawing a heart is no more a sign of love than waving at someone is an invitation to dinner. Affirmation that comes from any place other than someone who truly loves us, doesn’t satisfy.

We all seek to be accepted. Yet, we crave someone who not only loves us, but who knows us and still loves us. That’s the only type of affirmation that counts in both our hearts and our heads.

This affirmation is rarely found on earth. Parents try to love their children in this way, as do spouses, and friends. But, we fail. Our love slips. We let each other down.

For the woman with body image issues, shallow affirmation like this has little long term impact. Compliments ricochet right off of her. Accolades of her physical appearance are summarily disregarded by the negative voices in her mind.

Instead of knowing she’s accepted by strangers, what the woman struggling with body image really needs is to discover how accepted she already is by the one who knows her better than anyone else—God. The opinions of man will always fluctuate, as will her opinions of herself. (Our hearts deceive us, remember? We can’t trust our own feelings about our bodies.)

She’ll never please everyone, nor will she ever feel “everyone’s” acceptance. Whether she meets culture’s standard of beauty or never finds it, she’ll still struggle to feel the affirmation of others if she looks for it to give her life.

Instead, because of the amazing love of God through Jesus, she can be okay without their accolades. She doesn’t need strangers to draw hearts on her body because the one who knows her has written his name on her heart.

What did you think of these videos?