Does Barbie Cause Eating Disorders?

The “Questions” series picks up again with this timely ask about Barbie dolls. Barbie toys have made a huge comeback this Christmas shopping season and a cute new ad further encourages women to take a new look at the dolls. But, should you buy your daughter Barbies? Does Barbie cause eating disorders and poor body image? Read my response below.

My daughter has asked for some new Barbies for Christmas and I’m not sure if I should get them or not. Is it okay of her to play with Barbie dolls or will this give her bad body image? I’ve had a hard time with my body image for my whole life and I don’t want her to have the same problem.

Thanks for your help.

She’s controversial in some circles and I get it. Apparently she has a sketchy past. Combine that with the fact that she wears some outfits that would make any church lady pass out and the first instinct of some is to ‘just say no’ to Barbie.

A few years ago I took a call from a reporter at the Huffington Post who wanted to get my opinion Barbie. At the time, the doll’s sales were tanking and she wanted to know if I knew why.

Her first question was, “Do you let your daughter play with Barbies?”

“Yes, I do.” I quickly replied. In fact, I felt a little embarrassed as I thought about how much Barbie inundates our home. We have the Dream House, the Corvette, the movies, the dolls, not to mention their fabulous clothes and annoying-when-vacuuming, little high-heeled shoes. In fact, during my conversation with the reporter my little girl played the Barbie “Fashionistas” game on my iPad. Yes. Guilty as charged.

“So do you think Barbie causes body image issues?”

I said nothing. I may have even stopped breathing. I thought about the severity of my own body image issues—how I’ve never felt thin enough and never liked the way I looked in pictures. How many years had I spent wishing and trying to change everything about my body—from my eyes to my thighs? Was it all Barbie’s fault? And, would Barbie’s presence in our home now sentence my daughter to the same fate?

For the next twenty-four hours, my mind raced. I mulled over my responses to that reporter’s questions.

“Yes, I struggled with my body image” and, subsequently, “Yes. I played with Barbies.”

Was there a connection I just wasn’t seeing? Was it time to ban the Barbies?

I prayed and God was faithful to give me the answer.

The truth he revealed to me was that my body image issues didn’t come from six or seven years of dressing Barbie’s huge chest and teeny, tiny little bottom. No. My struggle with weight, insecurity, and a general sense of unhappiness about the body I was born with had nothing to do with Barbie or any other outside force.

The problem was in my heart.

Years ago, I may have been first in line to protest Barbie. Before I had a daughter I was certain I would keep her from all things Barbie and Princess. I also would have blamed the air-brushers, the creators of Photoshop, the pornography industry, Victoria’s Secret, the Miss America Pageant, and, last but certainly not least, every gorgeous-bodied celebrity with a personal trainer and a personal chef to keep her looking that good. (God has done a great deal of work to soften my heart on this front.)

Don’t misunderstand me, I still think most of the messages that come from our culture about beauty and what that looks like are harmful to women. But, they don’t cause body image issues. They only make them worse. Barbie, air-brushers, Victoria’s Secret — they aren’t the real enemy. They aren’t at the root of the problem.

The real enemy is the lie and, the great deceiver who perpetuates this lie. Ephesians 6 tells us that we don’t wrestle flesh and blood, but principalities, powers and rulers of the darkness of this age.

Neither do we don’t wrestle plastic dolls. 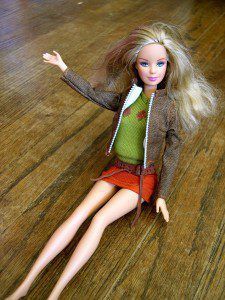 We wrestle idolatry. We struggle to believe that beauty or a better body won’t save us. And, in so doing, we replace the truth for a lie. We obsess over our looks because somewhere, buried deep in our heart, exists a part of us that believes wearing a certain size or achieving “beautiful” status will make us free, happy, and filled with joy.

We replace the truth that real and lasting freedom, peace and joy comes only from Jesus with a lie that we’ll get the same kind of outcomes if we could only look more like culture’s standard of beauty. And, yep. That’s called idolatry and until we confess it and repent, we continue to struggle.

So, back to your question. Should you let your daughter play with Barbie dolls?

Frankly, that is a matter of personal choice and conviction. But, if your main or only concern is body image–then let me encourage you that simply avoiding Barbie is not an effective strategy to prevent body image issues. (Don’t believe me? Then check out Christian author, Emily Wierenga, who shares in an early book how she wasn’t allowed to play with Barbies yet she still had a long battle with a serious eating disorder.)

You, girl mom, are the most influential voice in your daughter’s life on that front (with her dad coming in a close second). Though her elementary school aspirations may be to have an entirely pink wardrobe and live in a dream house, she’s far more likely to emulate you and your views of beauty and body image than she is to model her life after Barbie’s. 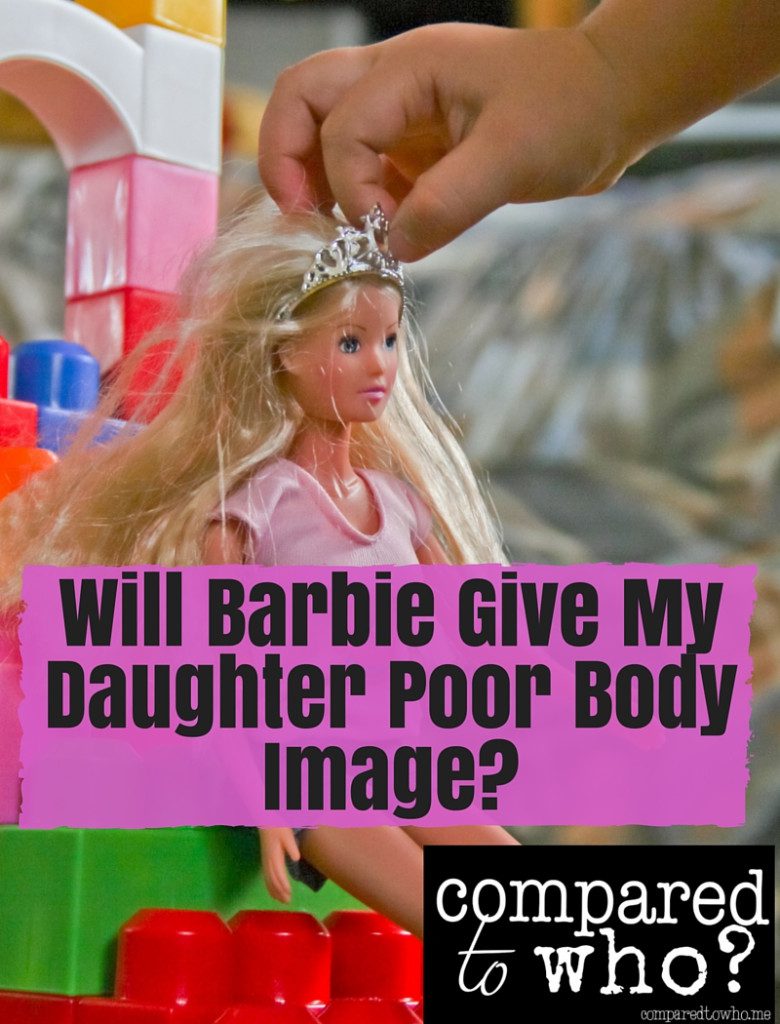