Whitney touched my heart when she sent me a short message that said this, “I was at the MOPs meeting when you came and spoke. Body image has been a debilitating disease for me for as long as I can remember. I’ve taken anxiety meds, gone to Christian therapy… nothing even took the edge off. The words you spoke did! I keep the (body image) prayer card in my Bible so I remember to keep God the focus. I realize this is a process… I have to let God in daily and grow in His word in order to overcome. The struggle is real. Im not “cured” but the hope is real also!”

I asked Whitney if she would share her progress with all of my readers… She’s still on a journey…but getting better. This is what she wrote:

The look on his face said it all.

It wasn’t even just a look. It was accompanied by hand gestures as to say “your legs are fat.” It was third grade. I was approximately eight or nine years old and I was already face to face with judgment and expectations about the way I look. It was then I became more aware of my appearance. I would try to sit in different ways as to make sure my legs didn’t “look fat” or were visible to anyone else In the classroom. I often would put my sweatshirts over my legs at my desk and eventually started wearing shirts down to my knees to hide them all the time. One silly remark from a boy in elementary school and I still wear sweatshirts or blankets over my legs when I sit.

I was picked on my whole life about one thing or another. I am a very fair skinned girl who doesn’t tan. AKA alien. This simple fact for whatever reason was a huge problem growing up. The looks of confusion when I would say “I can’t tan” is beyond me. I felt like a freak. Everyone else could tan! Being pretty meant being tan and I wasn’t, therefore I was not pretty. People would come up and say, “Are you afraid of the sun?” “Why don’t you tan?” “You look like Casper”

Even my friends and family would joke about it. I’ve cried about the color of my skin for years and years and I hated myself. I was fat AND pale.

I decided in 8th grade if I couldn’t be pretty then I would be “scary.” I started dressing in all black, bondage pants, chains, screws as earrings in my ears, dark makeup, you name it. I listened to Korn, Slipknot, Mudvayne, and whatever else there was… This music would isolate me in my mind. It fed my depression. It was sad but comfortable. The typical standard of beauty was void, the pressure was off. Sort of. I made myself believe it was anyway. I still hated my body and pale skin but at least now no one was expecting me to be beautiful. I kept this face on throughout most of high school. I even tried cutting at one point to see if it was really any help like some of my friends claimed. It didn’t.

During my junior year I met this guy who is now my husband. We started dating when I was 16 and I have to say, there is no stronger man. I was now moving out of my “goth” stage and trying to become “normal” again. I was far from it, and this poor guy put up with me through it all.

I saw a Christian counselor who told me (as I already suspected) that it sounded like I had body dysmorphic disorder. It’s a debilitating disorder that literally takes all that you hate about yourself, magnifies it, and then chokes the life right out of you–the way I thought I looked kept me from going places like the mall, the movies, and the beach. In fact it affected what my boyfriend did too because I would have full blown anxiety attacks if I thought he thought another girl was pretty, or if he saw someone in a movie, or when he took a beach trip. I was very controlling. I would scan rooms everywhere we went to see if there were any “threatening” girls constantly.

My heart would race and I would begin to get angry if I did see a pretty girl and I would immediately leave that location and ask a million times if he thought she was pretty. I would literally feel embarrassed about my appearance and sink into an instant depression and cried… a lot. Afterwards I felt terrible for accusing my boyfriend of looking at someone or actually just seeing someone because he has never then nor now given me any reason to worry about such things. If there was ever a teenage boy (at the time) so faithful and trustworthy, it was him.

It eventually came down to somewhat of an eating disorder. I was never officially diagnosed with one but anyone who knew me, knew something was up. I exercised 6 days a week between 1-2 hours and I only ate 1200 calories a day. Once a week I would binge till I made myself sick then I would starve myself the rest of the week and constantly picked myself apart in the mirror. I got down to 106 pounds and still felt fat.

I loved feeling empty. I am a horribly mean person when I’m hungry. If you can imagine it, I was a pretty mean and miserable person to be around during this whole ordeal.

Mean and miserable on top of anxiety. I kept this up for five or six years. On May 12, 2012, I married my high school sweetheart. I wish I could say all this anxiety fell by the wayside but it didn’t. I started praying. I’ve prayed before so I’m not sure what made this different but God was finally answering my prayers! Over time my anxiety lessened.

In June 2013, we had our first child. It’s a weird thing, but being pregnant really helped me relax about my body image issues. (Usually it’s the other way around.) Don’t get me wrong, I had a few breakdowns over my reflection but I was about to be a mother! Something about that made me feel special and beautiful. When my son was born it actually gave me a significant amount of self-worth.

God was continuing to break my chains and I’m realizing now how much time I’ve wasted worrying about my appearance all these years. I can’t say I’m cured. It still controls my life to some degree but not even close to how it was before.

I’m starting to learn that in order to overcome I must seek God daily and His truth. I have to constantly remind myself that my value is not found in the media. There is a real freedom from this kind of bondage when your focus is on Jesus.

I am taking this one day at a time. I have come a long way and I see the progress God is accomplishing in my life. I have such hope and I pray that the rest of us will realize the tremendous value we have in the accomplished work of Jesus Christ. 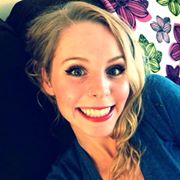 Whitney Kauffman is a stay at home mom of one sweet 19 month old boy. She loves being creative, spending time with her family, exercising in her spare time and 90’s movies. She’s also passionate about safe cosmetics, skin care, and home products and is a independent consultant with Ava Anderson Non Toxic.