Are You Willing to Be Better? When You Feel Like a Leper

I know I have. I remember when I was deep in the eating disorder and looked like mere skin and bones (as shown below). People would point at me on the road and laugh; would pass mean comments about me assuming I was deaf; and people would cast judgemental looks my way. 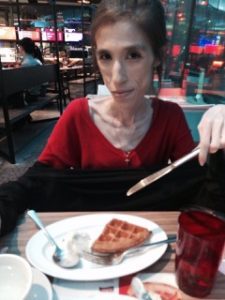 Nicole during her eating disorder.

In the Bible, lepers were the outcasts, the ones to avoid. The ones nobody wanted to be associated with. Yet, in the Gospel of Mark, we hear that Jesus healed a leper (Mark 1:40-45). Growing up, I had read this story time and time again – and my focus was always on the healing (which is definitely an important part). This time, however, as I was reading – I was struck by how the leper asked Jesus for the healing. Unlike the father of the demon- possessed child who said “if you are able“, the leper said “if you are willing“. This leper had no doubt that Jesus was able heal him. He knew that Jesus could. What he doubted, however, was whether Jesus would actually be willing to. For a long time, the leper had been cast aside and filled with such a deep sense of shame and unworthiness that made him question if Jesus would still bother about him.

Asking for Help is Hard

I remember when I was deep in throes of the eating disorder – I was so lost and afraid with my mind in a constant state of chaos. I was desperate for a healing touch.

Just like the leper, I knew God had the ability to heal me. Many individuals who were more than willing to help surrounded. I only needed to ask. There was definitely an element of pride mixed in there–the belief I could do it myself and that  my way was the best way.

More than that though, there was a wall of shame to overcome. I had been to countless treatment centres, had lost count of the numerous individuals who had tried to help me but eventually given up, had hit “rock bottom” time and time again. The sheer thought of reaching out (again) embarrassed me to no bound and I felt unworthy of more help.

Nicole: I had to realize that lies are just partial truths. (Photo credit Jennifer Wong)

Ironically, it was only when I started accepting I was still worthy of love, that I was worthy of help, that I was not an incurable “chronic” case like so many doctors labeled me, and started to focus on how I had a Father who was behind me all the way – that the true healing finally began. The enemy will constantly berate us with lies–that we have fallen too many times, that others won’t want to help us because they are sick and tired, that “real Christians” don’t slip time and time again.

We may have fallen many times…. but we serve a God who is more than willing to pick us up. Every. Single. Time. There are some who will give up (it’s hard watching a loved one go through an eating disorder!). But there will be some who hang on and fight to break down walls to love you. “Real Christians” do slip time and time again. . . but they admit their shortcomings to God and ask him for His grace and healing. God’s word tells us there is no guilt and condemnation; no shame for those who are in Christ Jesus. It doesn’t matter if we are deep in the eating disorder, on the path of recovery from an eating disorder, in the midst of a relapse, or fully recovered.

There is no shame in asking for help; no shame in reaching out. God (and many others) are more than willing to help, to fill us with love, to extend a helping hand. Unfortunately or fortunately, in order for the love to come in. . . we have a part to play. We have to let down self built walls of shame, of embarrassment, and of pride. Only then can true healing begin.

Nicole Friets. Although she is actually half American, Nicole Friets considers herself a true blue Singaporean as she has lived there her entire life. She recently graduated from University with a degree in Interdisciplinary Arts (specializing in languages/ life coaching/ religion). Good workouts and sunny days uplift her and she believes there is no such thing as too much Disney, salmon sashimi, or love. Read Nicole’s posts here.