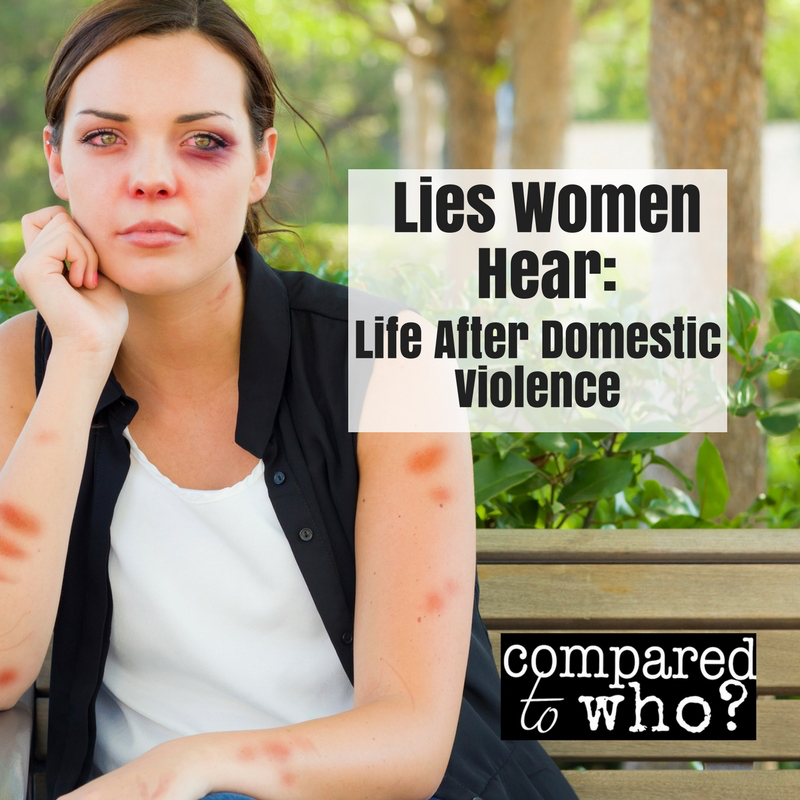 In honor of Domestic Violence Awareness Month, today Rebecca shares her powerful story revealing the lies women hear and how she found new life after domestic violence. Will you take a moment today to pray for all those who are victims and pray that they will find Christ and a renewed identity like Rebecca has?

Whoever said scars were beautiful probably never wore them on their face. To a passing stranger, the remnants of my abuse wouldn’t be obvious (thanks to a good concealer and strategically placed hair). But to my eye, it’s the first thing I see when I look in the mirror.

There is actual danger in devouring the lies that we aren’t enough. That we are damaged. Worthless. Inferior. The lie of, “if I were more, then I would deserve better.”

These lies were my mantras for years.

For the better part of a decade, my entire identity (and worth) was intricately tied to my relationship status. If I was single, there was something wrong with me. If I was attached, this was proof to me that I was “enough” (pretty enough and worthy enough, namely). 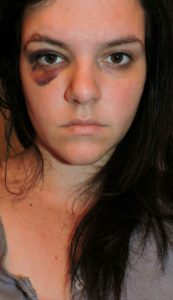 My desperation for another person to always define me perfectly set the stage for disaster.

Nothing held more power over my life than the words that other people spoke about me.

And then the abuse began. Men from all walks of life (even a couple in ministry). Each relationship had the makings of a depressing Lifetime movie (complete with every sort of abuse imaginable.)

Every beating I received echoed the lies in my heart, “See? There is something so wrong with you. You are flawed. You are worthless. Who could ever love you?”

My family and friends tried to tough-love me through it. But I ended up completely isolated, which is any abuser’s dream scenario.

My days were lonely and I was consumed with depression.

The shame of it was the worst. Walking around bruised and battered. Strangers walking up to me in the store, asking if I needed help. Making up ridiculous stories to explain away my injuries while my co-workers looked at me with disbelief and pity

Finally, I became numb and just faded out of one day and into the next. My entire personality changed. Mostly invisible for the next couple of years, I deleted all of my social media accounts and cut ties with most everyone I knew.

Then I found myself sitting on the other side of a decade so lost and completely broken. 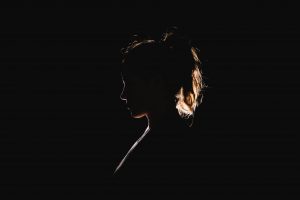 I didn’t recognize myself.

Sifting through old pictures, I realized I had become someone I didnt even recogize. Nothing about myself resembled the fun-loving, happy, hopeful girl who genuinely believed in all that is good a mere ten years earlier.

The hard truth is this: what we allow to determine our worth ultimately shapes our lives. How? Every major life choice from career path to spouse (and everything in between) is impacted by the scale in which we measure our worth.

The lies I believed had leeched onto every aspect of my life.

At 33 I found myself scarred, damaged, and asking myself: What now?

I wanted desperately to be whole and free. But I felt like I had been robbed. My life, my identity, the core of who I am. It all seemed lost. And I was a total mess.

You can’t go through an ordeal of abuse and not be affected by it. The physical wounds are only the start of it. Mentally, emotionally, spiritually and physically, I suffered. Long after my wounds healed, I still wasn’t ok.

If you knew me a little better, you’d know there are two things I truly despise: being the center of attention and talking about anything personal in general. But I knew I couldn’t work through all the mess in my head on my own. For me, speaking to a stranger that I’d never have to see again was way more appealing than talking to anyone I knew.

When I talked to friends or family, the conversation always quickly shifted to, “You need to do this. Why would you allow that?” Emotions were too high. With loved ones, sometimes everyone is too personally invested to just lay everything on the table and deal with. A counselor was a perfect fit given my extremely introverted personality.

I had to confront all of lies. I learned to recognize them and replace them with truth.

After years of physical, mental and verbal abuse, it was hard to sort through all the lies. I didn’t even know what to belive about myself anymore.

For two years I had avoided church. I felt too damaged. Deep down I knew that God doesn’t look at us the way we look at each other. We are never so damaged or so far gone that it affects his love for us for even a moment.

But I couldn’t wrap my head around that kind of love. That kind of unconditional acceptance. I also knew that it was exactly what I needed.

I began to pray that I would see myself as he sees me–praying wholeheartedly that no person would ever again determine how I view myself. That my heart would be healed and the sting of the memories would fade.

I devoured books (like Michele Cushatt’s I Am and our very own Heather Creekmore’s Compared to Who?) and sought out verses that shed light on who I really am. Who he says I am. I prayed that I would never become bitter because of the things I’d been through, but that he would use all these things (and work them together for my good.) 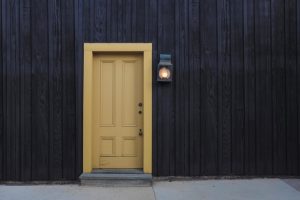 I’d love to tell you that I’m totally back to the girl I used to be. I’m getting there. But I still have nightmares. My hands still shake a great deal of the time. Some days I still need medication to get through the day. But I’m seeing more glimpses of the real me coming through everyday.

Abuse is always preceeded by lies. Lies we believe about ourselves. The abusers lies that keep the object of his/her abuse in bondage. But like the wise, age old words that still ring true today, the truth will set us free.

Maybe today is your day to say enough is enough. Maybe it’s time to shatter the lies with the beauty of truth. You are already immeasurably loved and valued as you are in this moment. No one deserves abuse (no matter what lies you’ve been told.) No one is beyond healing and redemption. And freedom is closer than you think. 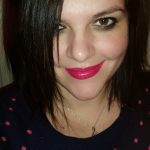