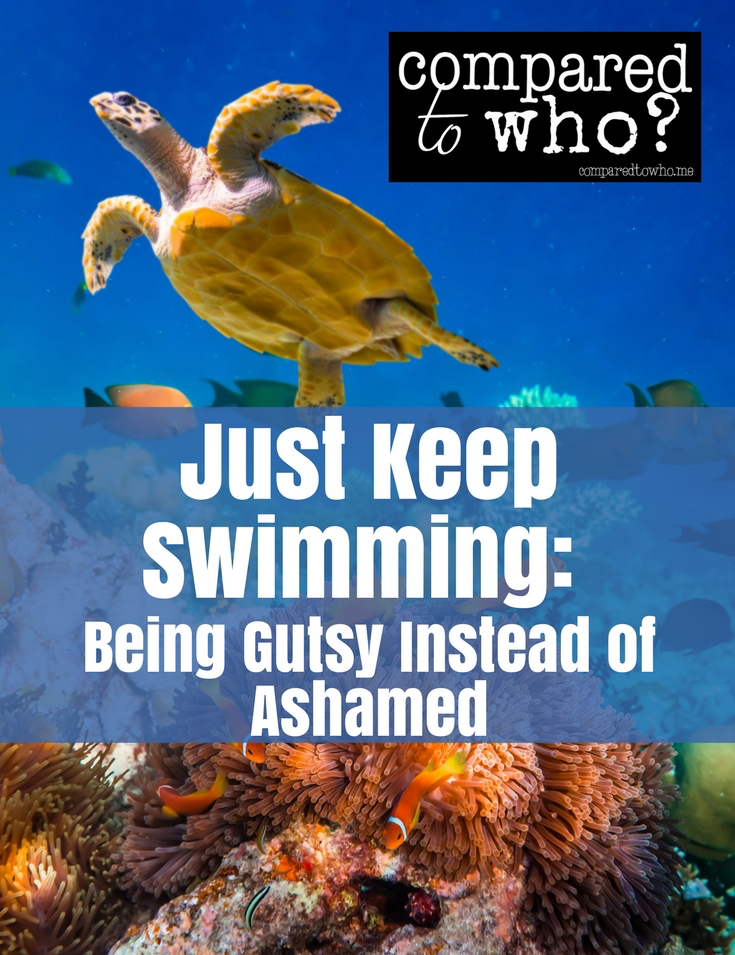 Just Keep Swimming: Being Gutsy Instead of Ashamed

I have recently made a decision to be braver than I think I am. Have you ever made a resolution like that? To just believe in something even if you’re swimming upstream?

It started with hearing a biblical woman described as “gutsy” in a weekend sermon. Something about that word resonated in my spirit and I felt longing. I recognized a deep desire within myself to be described with such a word.

To me, “gutsy” has a fierceness to it, a boldness that I just don’t possess. I see myself as more of a people-pleaser, a little timid and very insecure. But I was determined to become more “gusty,” so I immediately did what most people do when a new lifestyle strikes their fancy, I devoured books, blogs and podcasts on the subject. As I kept my mind steady on the topic of fearlessness I began to see examples of it in unexpected places.

In Disney/Pixar’s Finding Dory, Dory is a friendly fish with no short term memory. As I watched this movie with my kids, her bravery really stuck out to me; Dory is gutsy!

What Would Dory Do?

No matter what obstacle she faces, she finds a way to overcome and I think that not remembering her past allows her to move forward in her journey without hesitation. At one point her anxiety-ridden friends are asking themselves, “what would Dory do?” just to figure out how to take that next step. Their past experiences of suffering (think the chaos of Finding Nemo!) keep them from freely diving into risky situations; their fear makes them stuck.

Even her new octopus friend Hank, created to be free in the vast ocean, desperately seeks the safety of a glass aquarium, where no one can touch him. I could totally relate to that! 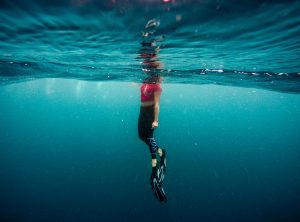 There are these two defining moments from my childhood that stand out to me as reasons to hide from the painful world and if I could just forget they ever happened, I know I could more easily overcome some of my own insecurities.

I was in seventh grade and, as my mother put it, still had most of my baby fat. My class took a field trip to the mall to go ice-skating and we all needed to ride the elevator down to the rink. As my friends and classmates piled in to the elevator, the coolest guy in class looked at me and said I better wait for the next one since I was too heavy for the weight limit. As everyone laughed and the doors closed, I don’t remember saying anything remarkable back to him. But, I definitely remember feeling ashamed and believing that I must be fatter than I had realized.

A short time after that incident my older brother was entertaining his (gorgeous) friend at our house. He jokingly reenacted that scene from the Bible where Jesus exorcises demons out of a man and sends them to the pigs. I probably don’t have to tell you that I was cast to play the role of the pigs. Again, shame and a deeper understanding of my identity as a fat girl took roots. Looking back, it strikes me as odd that my 16-year-old brother would use biblical material for his comedy, but I guess that’s what happens when you’re raised in Sunday School.

Anyway, there are other moments and interactions and comments I could recount (some even happened earlier this year), but these two were monumental in creating a belief in my own mind about who I am and what people see when they look at me. I took that belief of being fat and decided to keep it to this day. This deep-seated fear has held me back in a lot of ways. For example, I always felt too insecure to exercise, which kept me from losing my extra weight. I was also afraid of people labeling me as insecure, so I refused to diet and pretended to “love my body“, even though I hated it.

As I matured throughout college and then through the beginning of my marriage, I came to realize that somewhere along the way, fear hijacked my identity.

The root of my behavior was past hurts. If I could just be a little more like Dory and forget the pain, maybe I could move forward in courage and freedom.

Maybe I could get unstuck and start to see myself as “gutsy” as the Lord has made me. 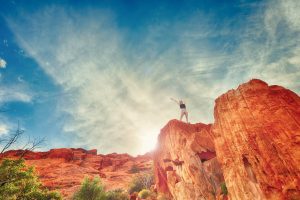 Letting go of past hurts is part of the solution to being free from insecurity. But, ultimately, the way to let go of the past is to forgive those who have hurt us.

Forgiveness is choosing to trust that the Author of our stories is using everything for a good and meaningful purpose. We have to forgive the “cool people” in our lives whose comments made us feel unlovable.

Maybe you have to forgive something even more significant than that. All I know is, God is the best author of them all and His ability to use horrifying events to bring about beautiful stories of redemption and healing is something to believe in.

If we’re serious about being braver than we think we are, then every day we have to choose to believe in Him. We have to look at all the scary things in the world, all the potential suffering, and choose to move forward, one step at a time, trusting that the One writing our stories knows better than us and will be with us every step of the way until we reach our happy endings.

See, Dory has to rely on the writers at Disney/Pixar to make it through her story, but you and I get to rely on the all-knowing, almighty Creator who loves us enough to kill His own Son in order to be with us forever. If He loves us that much, don’t you think it’s time to start trusting in His plan and just keep swimming? 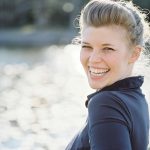 Allyss Flores is on the brink of 30 and enjoys woodworking and the outdoors with her husband and two small kids. She has always loved to read but has recently found a love for writing that would have been nice to have in college! An introvert and encourager by nature, she feels most alive during deep conversations over great or not-so-great coffee. She is very grateful for the opportunity to share her experience with God’s grace, as it has had a profound effect on her own life. Read Allyss’ other posts here.