Does God Give Us the Desires of Our Heart?

Sometimes I wrestle with that verse in Psalms 37:4 about God giving us our heart’s desires. How often does that happen? What about all the stuff I’ve longed for and never received? Is God really a good father who wants good for me? What about my let downs? My dissapointments?

Does God give us the desires of our heart? Really?

Yes. I believe he does. But rarely on our timeline and often in ways we don’t expect and could not possibly foresee.

He’s proven this to me again and again, but my most recent reminder came by way of an opportunity to be on the Weather Channel.

Now, before you go and think this was something it wasn’t, allow me to clarify.

Back in March, the Weather Channel needed a mom who could report from her backyard, on her phone, exactly what the weather was doing in her city. There was no real meteorology involved. Nor was there a cameraman, make-up crew, or any actual connection to Jim Cantore.

But, can I just confess that I loved every second of it– even when the producer asked me if my arm was fully extended because they could use a wider shot? (It was. Apparently I should add “short arms” to my body image gripe list.)

The air was cold, the moisture in the air from the coming rain and snow gave it even more of a bite, but I did not care. I was on the Weather Channel. 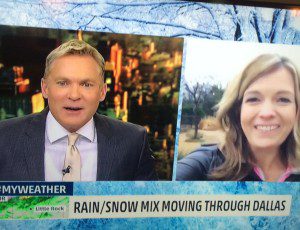 And, then, Sam Champion got my name wrong. He so kindly did a birthday shout out to my daughter, Katie, and then proceeded to call me Katie for the rest of the interview.

Again, I did not care. (He later offered a sincere apology through his producer.)

What you need to understand about me is that I have always dreamed of being on television. I used to cut giant wholes in the largest box I could find and stick my head into them and pretend that I was on television reporting the news and the weather.

I met a local news anchor when I was in tenth grade and toured the NBC studios near my town that same year. I felt alive in that newsroom and, when they let me sit in that anchor chair on the news set, I knew there was nothing I’d rather do then report the news.

So, I went to college to be a broadcaster. But by the time I attended the first required course of my major, Comm 101, I changed my mind. Why?

That day, the professor asked every student in the room to introduce themselves to the class and to say what they wanted to do with their Communication degree after college. I heard one person say, “I want to be a broadcast journalist.” And, I instantly sized her up as competition.

Hmmm…She seems competent. But there’s plenty of networks out there for the both of us.

But, then another woman said the same thing. And, another. This guy stood up and professed his love for TV news, and then yet another young man said he’d be the next Tom Brokaw. In all, out of our class of 35 or so students, it seemed as if most had television aspirations.

When it was my turn I made the same announcement. On the spot I couldn’t think of anything else to say, and, in truth, it was my dream. I was taking this class so that someday, somehow, I could be behind a news desk using my low-toned serious voice.

This was my dream. But, comparison told me I didn’t have a shot at it.

By the time I returned to my dorm that evening, I knew that I needed to find a new career goal. The world didn’t have room for seventeen more network news anchors. And, if there were this many aspiring broadcasters in my little Christian college, how many thousands upon thousands of men and women were pursuing this same vocation from schools across the country?

I couldn’t compete. So, I shouldn’t try.

By the end of the semester I had added two new minors. One in business and one in political science. Maybe I’d just go to law school or work in politics or business marketing. Those could be good fields too.

But, they weren’t my dream. 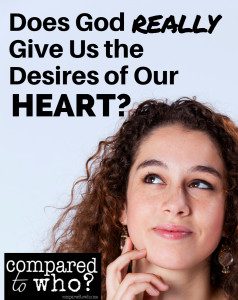 My career biography is long, but this is the short version. I never once applied for a broadcasting job. I spent some time in the trenches of politics, running congressional campaigns. I also spent time raising money and helping non-profit causes I loved get the attention they deserved.

In my twelve years of full-time work, I wrote scripts and speeches for others to use on television. I set up the interviews, picked out their shirts and ties, and stood behind the camera contorting my face and making weird sign language symbols to help my bosses remember to smile, sit up straight, or stay on point.

But, I never sat on the set. Nor did I ever have my nose powdered to eliminate on-screen shine.

In 2007, I found myself pregnant with my second child and still reeling from post partum depression from my then six-month old baby. I knew I needed to quit working, for my own sanity. But, in that, I assumed that all of my unfulfilled career dreams would never come true. I would “just” be a “housewife.” How could a stay at home mom ever be on television unless she tried out for a reality show?

Two years ago, God opened the doors for me to start making regular appearances on television. Through my role with the Dallas Moms Blog, I’ve had opportunities to sit on television sets just like I always dreamed I would. And, just like the Weather Channel report last week, every single time it happens my heart swells with the realization of just how personal our Savior truly is. 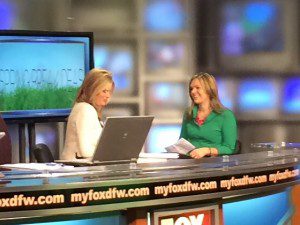 Jesus is the only one who knew that hidden desire of my heart was even still in there. I never told my husband. I never blogged about it.

I didn’t have to be on television, ever, and my life would have been just fine. But, that’s not the kind of father we have. He longs to give us good gifts. He desires to show us just how much we are loved.

I don’t know what it is for you. What that dream or desire may be that you have long forgotten and you may be quite certain God has forgotten about it too. But, I promise you. He hasn’t.

There’s no magic formula. It may not happen in your timing, but he still knows. And, he’s going to come through for you, too.