“Can I braid your hair?” The question came from one of the girls in my church youth group back when we were in high school. “Oh,” I said with a coy giggle as I pushed back the thick curly locks pouring over my shoulders like a hirsute waterfall, “I guess so.” My hair was my signature back in the early 90s. I played guitar with ambitions of becoming a rock star, and I considered it key to have a look that fit the part. And, as hinted at above, it led to attention from the opposite sex. And then came that fateful day. I was at Petland in the South Bay Galleria, where I sold habitrails and chew toys to mall shoppers, when one of my female coworkers pointed out that I had a receding hairline. “Really?” I tried to play it cool, but on the inside, panic set in.

Apparently, I wasn’t alone. Going bald is regularly listed in surveys as men’s most feared aspect of aging. Like it or not, many of them will get the chance to deal with that fear head-on, pun intended, because approximately 85% of men will experience some hair loss by age 50 (about 25% of men will start losing their hair in their early 20s). So, what are we all so afraid of, fellas? Hair might protect us from the sun in the summer and keep us warm in the winter, but sunscreen and a hat will work just as well as a mop of non-living protein strands, after all. Well, there are some rational reasons for being concerned about going bald. For one, you can probably remove becoming President of the United States from your bucket list—Americans haven’t elected a bald president since Dwight D. Eisenhower in 1956. In general, we associate lush, thick hair with youth and beauty, which, in a culture that highly values both, would be expected to translate to greater success in relationships and business. As the majestic mane of youth retreats and thins, men are afraid their chances at success will wane as well. And men put their money where their fears lie: According to InStyle magazine, Americans spend $4 billion annually on “hair loss prevention and restoration products . . . as men spring for medications, shampoos, even surgical measures to save their strands.” Men have other insecurities as well, of course. For example, many men are insecure about their height or weight. But these are quite different from going bald. Once we stop growing in our late teens, our stature is set, all others are immediately aware of it when they see us, and we must deal with it, for better or worse (I have written about this before here). In contrast, we can, to some degree, exert control over our physiques through diet and exercise, though this can be dicey territory (I have written about this before, too, here). 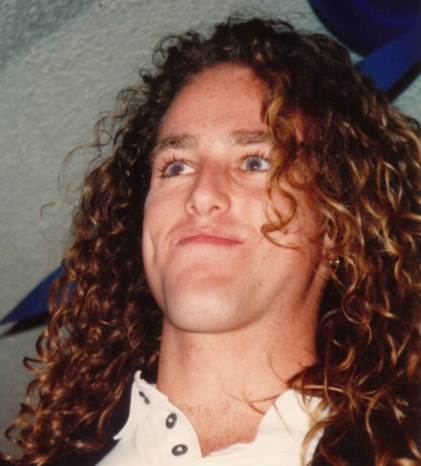 Me with my full head of rocker hair.

But going bald is different. It is usually a long, slow process that is mostly out of our control. As mentioned above, there are billions of dollars worth of “remedies” out there to prevent you from going completely bald, but it’s said that by the time you notice you are losing your hair, you have already lost about half of it. And most of the remedies prevent further loss—they don’t restore what is already gone. Anti-hair loss remedies aside, there’s a temptation to get creative with that comb, which many balding men succumb to. Oh, it starts so innocently. A tuft of hair that looks to be casually wafting off toward your temple, as though tousled by a carefree gust of wind, when we all know it was strategically placed there to camouflage a once flourishing, though now barren, region of your scalp . . . and the next thing you know, you’ve got the full combover! Don’t let yourself slide down the slippery slope into the combover, brother—there’s a better way.

There are two Bible stories that come to mind when I think of baldness. The first is the time Elisha was being mocked by young men when he was on his way to Bethel. “Go up, you baldhead! Go up, you baldhead!” they taunted him. And you likely know what he did: “He turned around, and when he saw them, he cursed them in the name of the Lord. And two she-bears came out of the woods and tore forty-two of the boys” 2 Kings 2:23-24. Now, it might be tempting to wish that, if you’re going bald, anyone who would dare mock you will bear some unpleasant consequences for your humiliation. But, one, that’s not very New Testamenty of you, and two, you’re not likely a prophet, at least not one at the Elisha level. Most interpretations of this passage indicate that the young men were being punished ultimately for mocking God’s prophet and therefore God Himself, and not baldness per se. So vengeance for your baldness is out. The second story, of course, is that of Samson, the Nazarite warrior-judge of Israel known for his long hair and great strength. As he told his wife in Judges 16:17, “A razor has never come upon my head, for I have been a Nazirite to God from my mother’s womb. If my head is shaved, then my strength will leave me, and I shall become weak and be like any other man.” I think Samson’s words capture what we feel like as our hair abandons us—that with our hair goes our strength, which in our modern world is associated with our youth and our opportunities for success. But as with Elisha, we are not in Samson’s position. Unless you took a Nazarite vow, which is extraordinarily improbable, your hair is not a symbol of God’s divine power in your life, as it was for Samson. We know, Christian, in the Lord’s calculus, your hair, or lack thereof, is insignificant. As we often explore on this site, the Gospel, God’s sacrificial love for you, is what defines you. To obsess on your thinning locks is to make an idol of your looks. God will let you do this if you want to, but all it produces is disappointment as you watch this idol age and fail to bring you joy or peace—even if you somehow avoid going bald. Looking in the mirror past your height and weight and physical looks, and past your hair (well, I guess if you’re balding, there isn’t too much hair to look past, but you get what I mean), and seeing a child of God provides the true satisfaction that is intended for us as His creation. But let’s get back to your balding head and some practical thoughts. 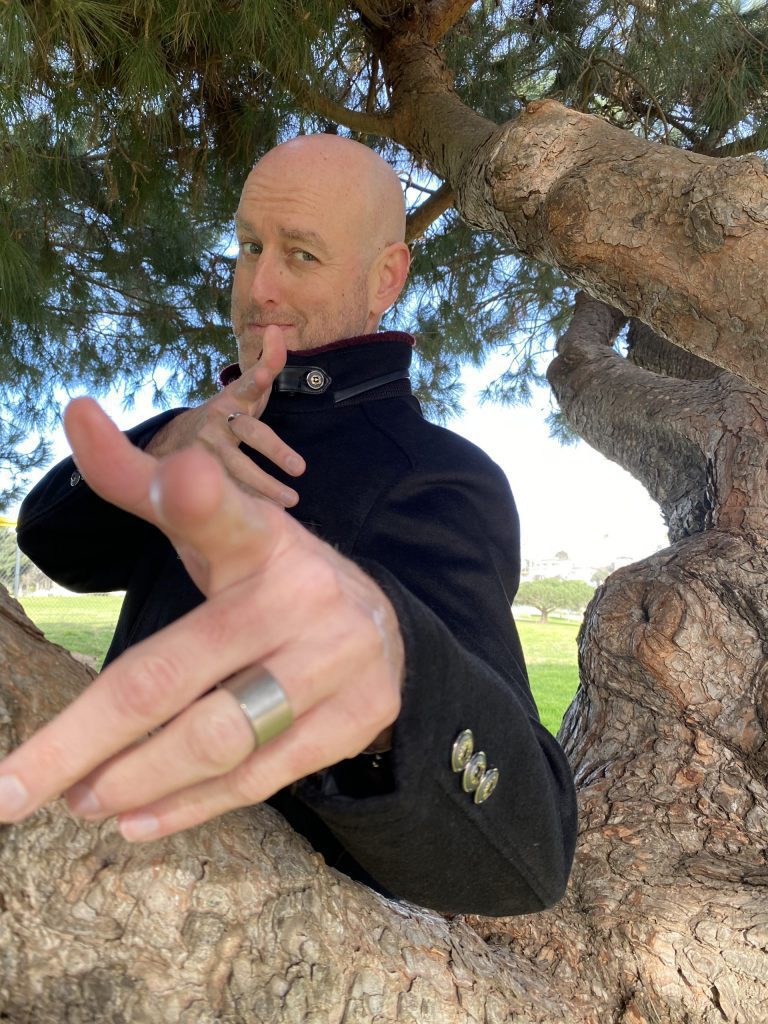 Practical Tips for the Road of Hair Loss

You are free to do as you please, obviously. You can put out the cash in the hope that whatever snake oil you’re rubbing into your scalp or tossing down the ol’ gullet will help you hold onto a few hairs and spare your vanity. You can go for surgery or a wig. You can let flow what hair you’ve got and go with a skullet. You can clip what you have short and learn to live with the slow slide of your hairline toward oblivion. Or, you can go bold, which, in my opinion, is the most fun . . . In screenwriting, there is a concept called the Dark Night of the Soul. This is the part of the third act of a movie in which the hero wrestles with an extreme challenge and must decide if he’s all in or if he’s giving up. For me, I watched my hairline retreat from that traumatizing day in Petland for about ten years, which lengthened my Dark Night into a Dark Decade. I cut my hair shorter and shorter, usually capping it off, literally, with a beanie. But finally, I had enough. How would I propel myself into my “third act,” the next phase of my life—in weakness, hiding my follicular dysphoria with a hat, or in command, taking control of the situation? I pulled the quad-bladed razor across my head with curious care, with the grain, then against it, leaving behind nothing but shining skin in its wake. And as the last dollop of shaving cream swirled down the sink, it was all gone—yes, my hair was all gone, but more importantly, gone was the struggle to slow a losing battle, the worry of how balding would affect my life, the fear that others would notice I was balding, the vain hope for a cure—gone. And it felt glorious. Full disclosure: It takes a few days to get used to having a chrome dome. And it is indeed awkward, though also hilarious, the first time you see each of your friends, who has only seen you with hair up to that moment. (Each time I saw a friend after my first shave, I said to them, “Do you want to see something funny?” and then removed my hat so we both could have a good-natured laugh at the glistening elephant in the room.) But within days, it just becomes how you look. And, here are some interesting insights should you go for the glabrescent look. According to research reported in Psychology Today, men with “thinning hair” receive lower ratings on various positive measures compared to men with a full head of hair. However, compared to men with a full head of hair, men with shaved heads were rated as being 13% more dominant, 6% more confident, 10% more masculine, about an inch taller, and 13% stronger. The cue ball is in your court, friend. 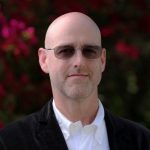 Sean Coons is an author, screenwriter, musician, and educator living with his wife and son in Idaho’s Treasure Valley. Sean is the author of Body: or, How Hope Confronts Her Shadow and Calls the Flutter Girl to Flight, a Christian fiction comedy exploring body image and intuitive eating. Sean’s second novel, Firefly: Let There Be Light, is a middle-grade epic slated for publication by Black Rose Writing on October 21, 2021. Connect with Sean at: www.SeanCoons.com, Facebook, Twitter, and Instagram.