The Birth That Defines My Worth

I shimmy my way out of the fitted dress and throw it on the bench so it knows it’s done me wrong. I didn’t really like it that much anyway.

But, then the next one won’t zip either. I re-check the size. No, that’s the right number.

I hate that they’re always changing the cuts. So frustrating.

“I doubt that’s it.” The mirror. It calls out again.

Why can’t it mind its own business?

“Who are you trying to fool? How many of those pies did you have to just taste on Thanksgiving? And, what about your secret rummaging through the kids’ trick-or-treat buckets? Then there’s the smorgasbord of Costco samples you tasted earlier this afternoon. Need I go on?”

Maybe the mirror was right. I’d obviously picked the wrong day to try on clothes.

The next morning, I seek the scale’s verdict. Would it agree with the mean dressing room mirror or would it abdicate me of any over-eating charges? I empty my bladder and remove all heavy clothing and jewelry so as not to skew the results.

What? Eight pounds? How did that happen? And the Christmas parties, candy, cookie making . . .it’s only just begun! There’s no excuse for gluttony, but there’s also grace for seasons of celebration. How can a woman who enjoys the holiday season not obsess over every calorie for fear of gaining weight? Is it possible to keep a healthy body image through December?

The answer just may be hidden in a Christmas carol. 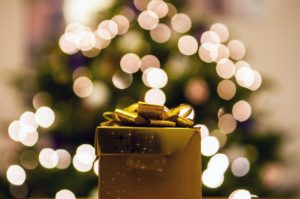 I won’t fa la la la la around the issue. Christmas is not the most wonderful time of the year for my body image. I puff up faster than my neighbor’s inflatable Frosty the Snowman. The seams of my clothing strain like the toes of my children’s over-filled stockings.

But, today as I blare the Christmas music, a song I’ve heard and sung hundreds of times catches my attention.

‘Til he appeared and the soul felt its worth.

On the cold December days and nights when the dressing room mirror tells me I’m not good enough and the scales tell me I’m not what I should be, my soul can still feel worthy. Christmas frees me from needing their approval.

I don’t need to seek to find value in my appearance.

I don’t have to strive to match my culture’s standard of beauty.

I am truly free to enjoy the holiday season.

Only Jesus’ birth defines my worth.

Oh holy night!
The stars are brightly shining
It is the night of the dear Savior’s birth.
Long lay the world in sin and error pining
Till he appear’d and the soul felt its worth.
A thrill of hope the weary world rejoices
For yonder breaks a new and glorious morn. . . 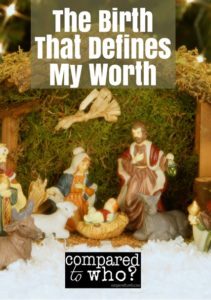