Today I am delighted to share a guest post from my friend Laura. Laura and I met through the Dallas Moms Blog where we both serve as contributors, and over the last few years we’ve come to recognize we have a whole lot in common—including the work of overcoming our body image battles. You are going to really love Laura’s story and you will likely relate to her “don’t feel good enough” struggle. I know I do! I hope you’ll read it and be encouraged today!

I’m not going to lie, I feel like a poser wearing my new fashion eyeglasses.

I’m not a trendy dresser, I don’t really understand how Pinterest works, my house is not cutely decorated, and I am pretty far behind on anything popular.

It took me a while to get used to them and I am still pretty self conscious wearing them outside the house. I was rocking Ben one night recently (because bless that boy, he still doesn’t sleep through the night and sometimes needs wants to be rocked to sleep) and started thinking about how the glasses made me feel (my therapist says I should focus on situations that make me uncomfortable and see how they make me feel inside. It’s super fun to be thinking about feelings all. the. time.).

What I realized is that I feel like a poser in my glasses because I don’t believe I deserve good, trendy, expensive things. 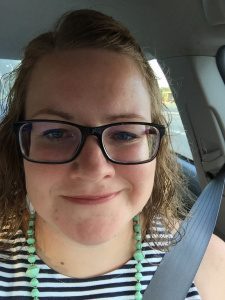 Eighth grade was the first time I ever thought about my body or how I compared to others. I was a healthy size 6/8, played sports and didn’t really have a care in the world. All the girls in my class audition for the school musical Annie. I was so excited to finally have something in common with all the other girls at my new school. Then the casting came out: every girl in my grade had been cast as an orphan but I had been cast as Miss Hannigan. I was horrified when my drama teacher in front of the class explained to everyone that, “I got the solo and the role of Miss Hannigan because I was the biggest girl in the grade.” I looked around for the first time and realized that I was, in fact, the biggest girl in the grade. I didn’t really care, I didn’t think I was fat and I wasn’t to concerned about it. Life went on, I sang the solo and forgot about it.

I started at a new school in 10th grade. It was a smaller school with only about 60 kids in my class. Despite the small numbers, I didn’t really make any friends. I had a core group of two girls who I was in a Bible Study with, but that really was it. So imagine my horror when a popular boy turned to me as the swim team was being handed their swimsuits and said, “Good thing you aren’t on the swim team, no one wants to see a beached whale flopping around in the water.” I stared at him, unable to even process the words he had just said to me and the rest of the room.

That was the first time it ever crossed my mind that I wasn’t good enough. That there was something I was missing, and that I definitely did not have what everyone else wanted.

The rest of high school passed in a painful blur (there is no amount of money you could pay me to relive high school) and off I went to college where I finally flourished. I loved college. I found my people, I found my jam, I made friends, I was popular, I was known and recognized on campus, I made a difference and people listened when I spoke. It was everything I dreamed college could be. And then in a series of events where I was not personally involved but had to make decisions on whether or not the actual people were involved should be held at fault (I was the director of a large organization on campus) everything changed. My decisions were not popular, but I stand by them today. A group of people headed up by my roommate/best friend decided that I was entirely at fault, that I could no longer be trusted. I lost almost all my friends.

In a flash everything was gone.

I resigned myself to a lonely senior year, knowing that I had taken the high road, hunkered down with my roommates as my only friends left and started dating my now husband. Looking back, I can see that while I resigned myself to the situation knowing I was in the right, I also secretly believed that I didn’t deserve anything good so it made sense for everything to just disappear.

Fast forward to now, eight years later, I can talk about the past now without anger, tears or bitterness. I’ve seen most of the guys who berated me in high school grow up to be godly men who lead their families well. I’m not friends with my former roommate from college, but see her on social media from afar and can assume she is doing well.

Life has moved on but the whispers of my past still ring strong in my ears.

I am the biggest girl in the grade.

I don’t look good in a swimsuit.

Nichole Nordeman has a new CD, The Unmaking, and I can’t recommend it enough. One of the lines in her song, “Name” stands out to me, “Do not ask the shadows, the light of the world knows your name.”

Don’t ask the stupid high school boys or the ex college best friends or the seemingly successful by the world standards women or the friend group I have always wanted to be in to define me, the light of the world knows my name.

It’s something I have to remind myself of every day. I am not a poser in my new glasses. I fit in at church. I do not stand out at the park. My size does not define me.

The light of the world knows my name. 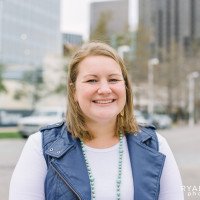 Laura went straight from college to Washington, D.C. where she worked for a Senator on Foreign Policy. She gave up the job of her dreams for the man of her dreams. After spending a few years working on campaigns and teaching college classes, she traded in her business suits for athletic shorts. She now spends her days chasing her rambunctious boys through the park, cooking, building train tracks and reading. She and her family live in Dallas, Texas. You can follow her chaotic and full life at: happilymurrayed.com. Or, find her on the Dallas Moms Blog with Heather!