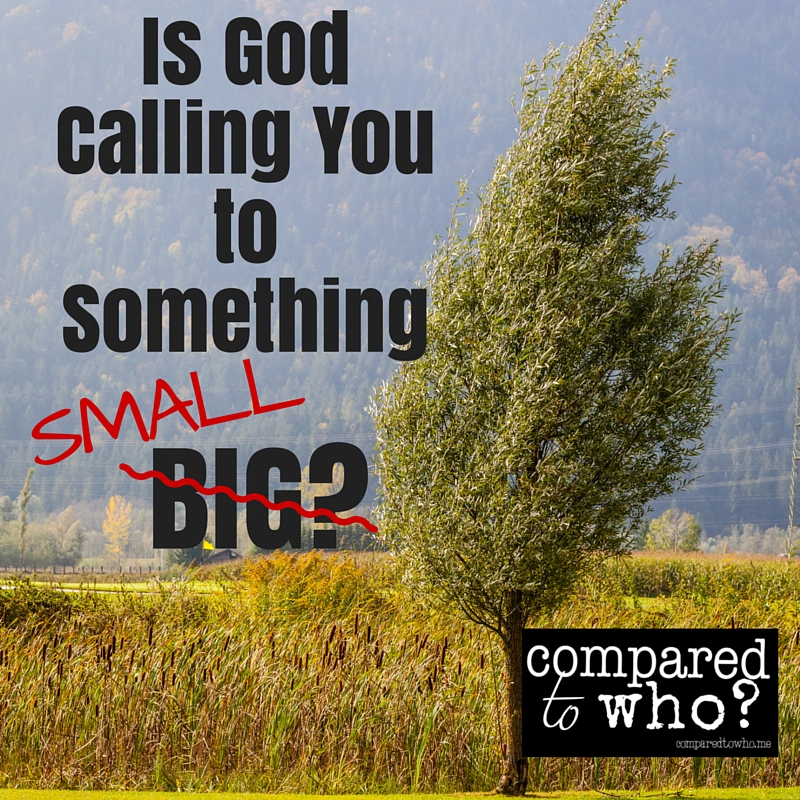 With a sheepish grin, she glances down at her coffee then back at me. She takes a few minutes to choose the right words then speaks,

“Well, I don’t know. We feel like God has called us to do something big. Really big. Like something major.”

“I don’t know. We just feel it. God has something really big planned for us and this business!”

She repeats that word one more time and a twinge of conviction pricks me in the spirit. I wrestle the same ambitions. I know those feelings. I live in Texas where the unofficial state mantra proclaims bigger is better.

“But what if that something big looks more like something small to our human eyes?” I press.

“Sure, that could be it. But, we just really feel like what God has for us will be big in an obvious way! We’ll be successful and well-known.”

I sigh, smile, and change the subject. Ambition blinds us.

We all desire the big assignments, don’t we? Use us “mightily,” we pray. Help us do “big” things for You, God! I’ve said it.

Yet every time I engage in this type of one-on-one conversation I feel foolish—foolish because I can clearly see selfish desires in others, while I struggle to identify them in myself.

I don’t want to have a small blog, a little book, a small impact on women. I want to go big or go home.

Then the enemy gets in my ear. “Why bother if you don’t reach thousands?” He taunts. “You’re not big enough to have a significant impact.” He jabs.

It’s tempting to believe him. Especially when I see “big” all around me.

Big means a hit television show, millions of copies sold, speaking to a sold out crowd, or album of the year.

Big means more Facebook fans than you can scroll through in a day, financial reward, and a life of fame.

Big feels important. Big is obvious, in your face. No one overlooks big.

Why bother with small? Does small even matter?

The enemy wants us to believe it doesn’t.

God doesn’t use our dictionary. “Big” in God’s economy looks a whole lot more like small in ours.

It’s the advent season. I read the Christmas story—the story of Jesus’ birth—and think about Mary. Now there’s a woman who accomplished something big, right? Her fame has certainly endured through the centuries.

When the angel appeared, he told her she’d have a baby, name him Jesus, and he would take David’s throne. He would be the king who would save people from their sins. Mary did have the promise of something big.

But, I wonder if Mary had heavenly eyes to see that far. Or, if to her, the assignment felt small. She carried him in her womb, delivered, and then mothered him. She fed him, dressed him, and then taught him to care for his own needs until he was old enough to be independent. She was “just a mom” for decades—thirty-three years even until he died on the cross. Did this really feel like something big to Mary? Or, did pregnancy and the mundane of child rearing feel small? Really small? 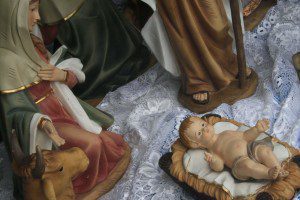 I don’t know the eternal significance of the time I invest in caring for my children or writing a single blog post.

I don’t get to choose which of the many words I say will have an impact. I just have to listen to his voice and speak when he gives me the syllables.

If I serve someone else with my time or my money, I don’t get to see whether or not my investment will bring yield. I just have to go when he prompts, give when he leads, and move when he says move.

God only asks me to obey. He guides me in small steps—with no promise of fame or fortune. I make one footprint at a time along a path that has a course far too complex for me to see or understand.

Everyone wants to do something big.

But, what if God is calling you to do something small?

God, please give me eyes to see the big in the small.