I love this post from my friend Trisha about the impact of her actions. Do our body image issues wear off on young girls? I think they do… Read this. (Then, read the rest of this series on “Helping Your Daughter With Her Body Image Issues.“)

I combed through the clothing racks nervous we wouldn’t find the right size to fit Claudia’s large frame. When we found the purple leotard, I took it as a sign from Heaven.

Weeks before I tried to steer my 10-year old niece away from the sport of gymnastics. I feared her husky build would be an impediment.

The first day of practice I had noticed the other girls, how their leos stretched over bony torsos. I never said anything, but it turns out Claudia had noticed too.

It wasn’t long before she cocked her head around my bathroom door and asked if she could weigh herself. I decided to let her weigh this once.

“Why are you so quiet?” I asked a few minutes later. 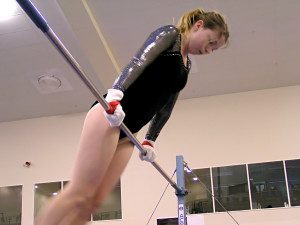 “It’s just the other girls looks so much different than I do. They are so much smaller,” she said confirming my suspicions.

I told her everything I was supposed to. I told her she is beautiful just how she is. She is loved, accepted and cherished. I told her that weight is only a number and how God has made each of our bodies different shapes and sizes.

We talked about her strong muscles and everything that makes her beautiful. She cheered up, but since that day, I’ve wondered how much the comparison game is caught rather than taught.

Claudia had to overcome some specific challenges since coming to live with us less than two years ago.

Back then, she ate more than my husband. While obese, she was starved for love and attention. She ate to fill the void.

Two years ago, she couldn’t run half a block without keeling over. In lieu of playing at the park, she would sit and watch because playing made her so tired.

She’s made so much progress since then. That’s why the conversation after the gym caught me off guard. She never once indicated to me that she ever thought about her body.

She had always indicated the opposite of poor body image. Confidence bubbles out of her.

So I asked myself what had changed? And then I realized it was me.

She had seen me log meals in my Lose It app. She witnessed my own renewed focus on healthy weight. Had she overheard the phone conversation where I bragged to grandma about losing 10 pounds?

I thought I had kept my goal a secret, but she was subtly aware of my own concerns, my own self-consciousness.

I remember how perceptive I was as a kid, always understanding the unspoken actions and attitudes.

Had she learned negative body image through osmosis? I know I had.

Although no one ever spoke it out loud, thin equaled acceptance in my extended family. Growing up, I learned the perils of being overweight in a family that valued slim.

I still feel a twinge when I think how my cousin mocked me in strange delight, like he wielded some kind of power over chubby, adolescent me.

Thinking back, I realized that although my actions weren’t overt, Claudia must have been imitating me that day when she asked to weight herself.

Like any good parent, I’ve tried to insulate Claudia from my own insecurities.

How do you teach a young girl that she’s valued just as she is when our culture so deeply values thin frames?

Since that day, I’ve been more careful about my actions.

I’ve focused more on healthy eating versus calorie-counting. We’ve traded fruits for baked treats. And in all of this I’ve tried to model portion control.

Throughout Claudia’s health journey we never used the word “diet,” but I became very careful about applying this word to myself.

It’s been four months since that number on the scale upset Claudia, and I haven’t seen her upset since. She’s regained all of her old bravado.

I truly believe steering my attitudes in the right direction was the most crucial decision in teaching her how to care and nurture her own body.

Trisha Mugo is an award-wining writer, grace-dependent youth pastor and wife of a Kenyan warrior. When she’s not blogging or taking care of three kids, she’s cooking, reading or contemplating life. She loves learning, Chicago-style pizza and meeting like-minded friends at her blog, www.TrishaMugo.com.