Love this story from my friend Allison. A great reminder for each of us today! Check it out.

Last Wednesday, I was stopped at a stoplight. We were on our way to drop off my son at preschool, and the day had already been…well, special. I glanced up at the rear-view mirror and realized in the chaos of the morning, I had forgotten to put on any makeup. I am not a big make-up girl, but my daughter had been up with teething pain the night before, so I decided my tired eyes needed a little help. I dug into my purse and pulled out my concealer, and as I began dotting it underneath my weary eyes, I caught a glimpse of my baby girl in the backseat. She had taken her tiny little finger and was mimicking my motions on her own face. It stopped me completely in my tracks. I watched her closely as I continued to apply my makeup, and I saw her mimic each and every motion I made…unscrewing and screwing the tops, blending the blush, brushing on the mascara. Although it was the first time I had noticed it, it was clearly not the first time she had decided to do this. She was focused, soaking in each and every motion, as if she was memorizing a new skill.

Later that day, I began to think about what had happened in the car. It made me wonder what ELSE she had seen me doing and how those moments had affected her. (And I kind of panicked…I really thought I had at least a few more years before I had to deal with this stuff?!!) It dawned on me at that moment that even at a young age, I was already teaching her what it means to be a woman.

While this little copycat situation may have seemed cute and innocent on the surface, I take these sorts of things very seriously because if I’m being completely honest, raising a daughter in today’s selfie-obsessed, social media crazed world TERRIFIES ME. I never, not for one second, take it lightly that I am the first female role model my daughter will have.That thought is never, ever lost on me because for years, I was told I would never have children. I shouldn’t, according to doctors, have been able to conceive and carry children at all because of the damage I did to myself many years ago. 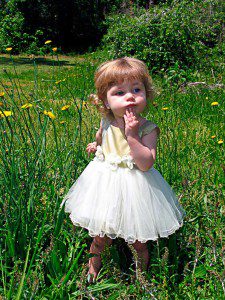 But, because we all know God is the ultimate fancy-schmancy miracle worker, here I sit today blessed with not one, but two beautiful kids. If you had told me at 17 that I would one day be a mom to a tender-hearted, sensitive little blonde boy and a vivacious little lady with piercing chocolate brown eyes, I would’ve laughed in your face. It shouldn’t be possible.

For those of you who don’t know me personally, I battled Anorexia and Exercise Bulimia for nearly four years…a battle that should’ve cost me my life. My disordered eating began young at just 13 years old, but it peaked at 17 when I was hospitalized for a heart condition. I had done so much damage those four years waging war with the enemy for control of my weight that my body was literally breaking down its own muscle to stay alive. By God’s grace, my gynecologist caught the condition in time and put me in the hands of an amazing pediatric cardiologist who literally saved my life. The road ahead of me was long and not without struggle, but God carried me through it all, and the hope of one day defying the odds and becoming a mother motivated me to stay the course and fight the fight.

Fast forward to Valentine’s Day, 2013. I am sitting at the perinatologist’s office for a sonogram of my second child at about 13 weeks along. I knew prior to that appointment that there was a chance she would tell me the gender that day. She was able to tell me at the same sonogram that my firstborn was a boy, so I kept my fingers crossed that I’d find out again. As the doctor took all of her measurements and showed me various things going on with the baby, she kept saying that she couldn’t determine the gender just yet and needed a different angle. After about 20 minutes of still undetermined gender, I resigned myself to the fact that I wouldn’t know the answer that day. And then, in the eleventh hour, the doctor smiled a big smile, looked down at me and said, “I can see it clearly now. You have a daughter.”

Through big giant crocodile tears of disbelief, I asked her, “How sure are you? Like 90%? Or more? Because I’ve heard it’s too early to know that it’s a girl…”

That’s when my panic began. Memories of everything I had been through as a teenager came to mind. I immediately wanted to put that precious girl in a bubble and protect her from all the cruel things I knew she’d inevitably encounter in the world. The thought of my perfect baby girl experiencing bullying, gossip, heartache, and body hatred was just too much for me.

But I’ve learned that the miracle-working God who helped me overcome my obstacles and answered my decade of prayer is the same God who is wise and guides me every day as I model true beauty for that baby girl. We may not be sitting down having heart-to-heart conversations about mean girls at school yet, but my actions today matter. It matters that we eat meals together. It matters that she sees me look in the mirror with a smile on my face. It matters that we go out for walks as a family. In these little years, we are planting the seeds of contentment.

That morning in the car as I watched her mimic me putting on lipgloss, God reminded me that I have an incredible responsibility and obligation to be sure that my children grow up in a home where they see true values – the good stuff like honesty, generosity, service, and love. If what they see instead is me hiding my dark circles, obsessing over having single-digit clothing sizes, or worrying about the way my chin looks in a selfie, I’ve missed the mark. The way my children approach the world and view themselves starts early, and it starts with me.

Those little eyes are always watching…so today, I am going to choose to show my daughter that what is beautiful is not the makeup on my face, but the way I love my family, my faith in God, and my kindness toward others. So I challenge you today to think…when those little eyes look at you, what will they see? 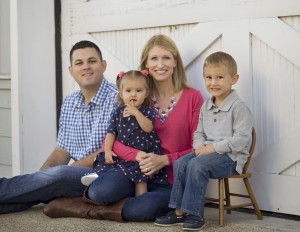 Allison Ezell is a coffee-loving, Christ-following middle school English teacher taking a temporary hiatus to stay home with her two young kiddos. While most days revolve around park dates and avoiding the laundry, she can also be found reading nonfiction, running in the great outdoors, and volunteering. She is actively involved in MOPS, an amazing play group, and her church, Hope Fellowship of Frisco. Allison is also active in the Elisa Project, an organization that helps youth overcome eating disorders. 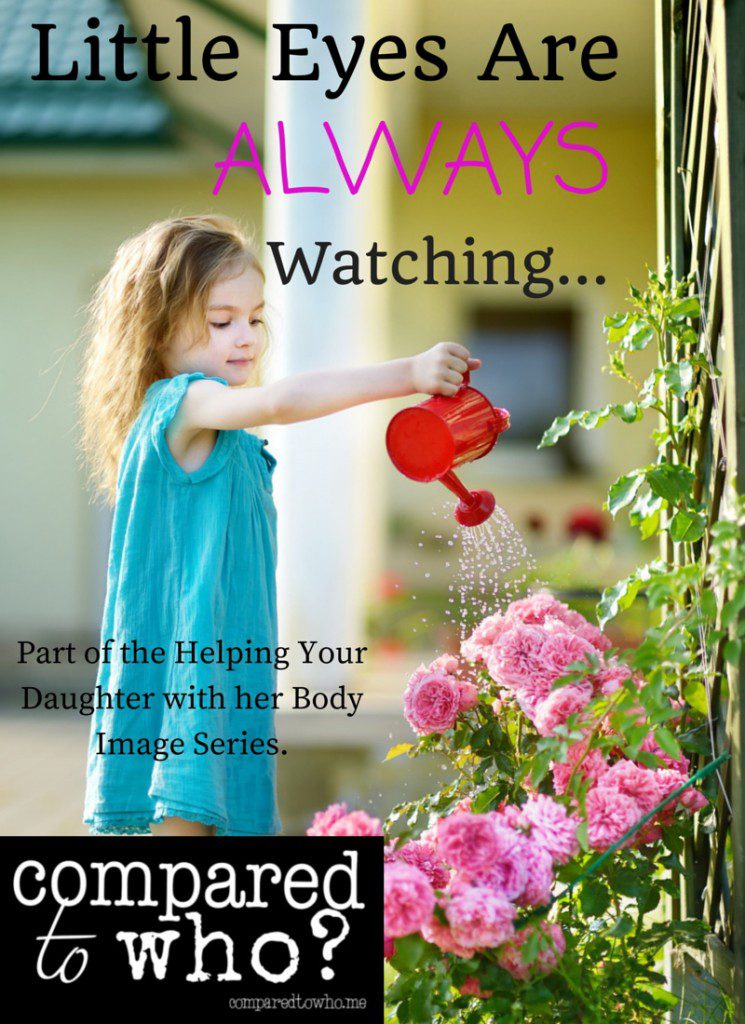