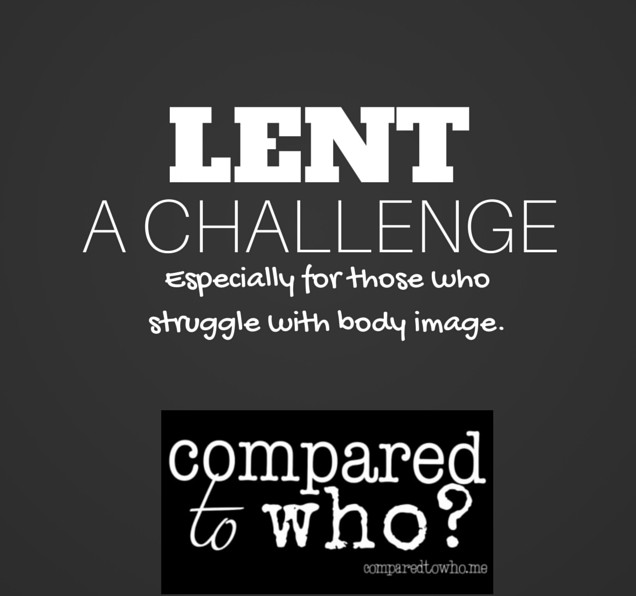 A Challenge for Lent if You Struggle with Body Image

At barely twenty years of age, I found myself working as Deputy Press Secretary for a U.S. Congressman on Capitol Hill in Washington, D.C. My co-workers shared two attributes. Most were men and most were Catholic. For much of those fifty hours a week, it was just these seven rowdy, twenty-something guys, their usual antics, and me.

One cold February in Wednesday, they surprised me. The gang left for lunch together. This part wasn’t unusual. I called out from the back, “Hey, where are you all going?” They responded, “Church!”

That part was odd.

“Okay. Church? Okay.” I hollered as they shuffled out the office’s heavy wooden door.

Church? How could anyone squeeze in a church service on their lunch break? Church happened for two hours on Sunday mornings and an hour and a half on Wednesday nights. My protestant mind couldn’t comprehend it.

When they returned to the office an hour later, I noticed something peculiar. A couple of the guys had black smudges on their faces. With my stellar intuition, I deduced they must have had car trouble on the way back and somehow spread grease to their foreheads in the car repair process. This wasn’t the first time these guys needed my help with their appearance. Straightening their ties, pointing out lettuce in their teeth. . . Keeping them looking professional was the unwritten part of my job description. Good thing they had me around to keep them from looking foolish.

“Hey, Tony. You have some black stuff on your head. I noticed Vinnie had a smudge of it too.”

Me: “What? You went to church to get grease on your face?”

Over the next few minutes, the Congressman’s staff briefed me on all things Lent. Tony, Vinnie, Peter and the rest of the gang of Catholic boys told me about their traditions including getting the ash rubbed on their foreheads on this particular day, which happened to be Ash Wednesday. They shared what they were giving up–sweets, coffee, and other vices–until Easter Day.

I didn’t really understand it. No one I knew did that. Yet, the idea appealed to me.

Giving up something…like sweets? For six weeks? Hey, that sounds a whole lot like a diet. I’m good at diets.

And so, exactly twenty years ago, I began the practice of observing Lent. Every year on Fat Tuesday, I’d eat as much Valentine’s candy as I could and then vow to refrain from sugar or sweets for the next forty-some-odd days. Then, every year on Easter Sunday, I’d break the fast with an over-the-top binge on chocolate bunnies, peanut butter eggs, and all things Cadbury.

Truth: I understood diets, not Lent.

A few years ago, God revealed to me that my Lenten practice was more about my weight than anything related to Him. This gave me pause to stop and question my own motives–to the point where I refrained from Lent that year.

I thought I was “doing” Lent well as long as I didn’t “mess up” and eat a Snickers. But that was a dieter’s mentality that reduced the season to just another six-week restricted eating plan.

Lent is something different. It should be about denial, sacrifice, and re-focusing for a reason: to remember what it is that Jesus sacrificed for me. Lent offers me a chance to spend these weeks preparing for Easter and really processing God’s great love.

On this Ash Wednesday, I’m again giving up sweets, though a different type of intentionality leads my quest. When I am busy, I turn to sugary foods for comfort. Over the next six weeks, I hope to take pause and pray through my stress instead of eating those emotions. It will take discipline to not rush to the pantry every time I hear bad news or feel overwhelmed, but I believe this is a lesson God wants me to learn.

I’m also planning to read through the Gospels as part of author Margaret Feinberg’s #LentChallenge. I’m already doing a challenge our church calls “First Fifteen” where I have committed to spend the first fifteen minutes of everyday in God’s word. This will add a new dimension of focus to my time each morning.

A new friend emailed me today telling me that God had asked her to give up her negative body image for Lent. How amazing is that? She expressed that she wasn’t really sure how to do that but, she was ready to find freedom from her body image struggles. Awesome!

Last Easter season, I read a blog post written by a woman who had given up mirrors. I’ve also had friends who battle body image tell me they gave up their bathroom scales. I just read this post from a fellow Christian blogger on giving up lies–the lies we believe, like we aren’t good enough. Wow. How powerful!

One other idea is to give up social media. If comparing yourself to others is an area of struggle for you, then I highly recommend trying this idea.

If you struggle with body image, here’s my challenge for you: pray through whether or not this would be a good year for you to consider the practice of Lent. Consider giving up your mirror, scales, sweet treats, magazines, media, or even the enemy’s lies!

It’s a forty-plus day commitment to pursue a deeper relationship with Jesus Christ and one that can have a profound impact on your body image.

If you are like I was, and don’t know anything about it, here are a few resources that I’d recommend to get you started.

Here’s an interesting article from Christianity Today called, “Lent: Why Bother?” that explains more about protestants observing the practice.

Here’s a resource with focused readings and devotions for Lent put together by the Gospel Coalition last year.

Why Would We Observe Lent? Here’s a good article from Noel Piper (wife of Pastor John Piper).

My friend Brittany at Equipping Godly Women has some great suggestions for observing lent too.