Some lessons are easy to learn. Others, like how to really help your daughter with body image, require an object lesson.

She chanted these two sentences over and again like a tiny, red-haired robot. My stomach churned with fear. She was only four years old. How could she be this aware of her appearance already?

“Why must you wear a dress, Sweetie? We’re just going to Chili’s. You look nice. Your clothes match. That’s a really cute outfit. Let’s go.” I begged.

“I will not be pretty unless I wear a dress.” she replied.

Not even yet old enough to write the sentence she spoke with such conviction, my young daughter had already concluded that her value and her appearance were linked. Did she think she needed to dress up to be liked? Had Dora or Cinderella or one of those shows that I let her watch fed her this definition of value?

Where had I gone wrong? 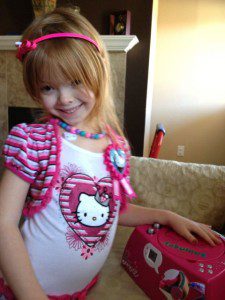 Sure, her mother is a recovering diet addict who never leaves the house without make-up and often spends seven minutes in morning devotions and then fifty-seven minutes choosing just the right outfit for the day. . . But, she wouldn’t have noticed all of that. Right?

I was always careful around her, never complaining about my weight (in her presence) and never uttering the “D” word (“Diet”). Not even once. I didn’t audibly fret over my own attire, instead I whispered my “Does this look okay?” type of concerns to my husband in the front of the van. She couldn’t hear that, right?

My goal was to be the “Appearances Don’t Matter Mom.” Someone owed me a certificate of accomplishment for the way I gave her freedom to pick out her own clothing AND wear it out of the house. (Although my insides screamed with embarrassment at the thought of her actually going to church in a plaid skirt and striped top. Somedays intervention was still necessary.)

But, my mission to carefully and consciously raise a daughter who would not repeat her mother’s three-decades long struggle with body image was jeopardized just four years into the project. There she stood–all of thirty-five pounds and thirty-three inches–wearing a cute shorts and top set on this August afternoon. Yet, she refused to go to dinner without changing clothes. She could not possibly eat a plate of chicken fingers and fries without first putting on something with a skirt, preferably pink.

Even worse than a Pinterest fail, I was a Mom fail. Something had to change.

I begged God to show me how to stop the cycle: How do I guide my daughter before she falls into the same trap I worked so hard to climb out of?

He faithfully and gently spoke the answer to my heart.

Though hard to swallow, the truth revealed that I didn’t know where my value came from. So, I had no ability to effectively show my daughter where her’s came from either.

What I Had to Surrender for My Daughter’s Sake

I needed to believe that my salvation through Jesus Christ was enough to free me from my slavery to my body image. But, I struggled to recognize that beauty had become my idol and that I was trusting it to give me peace, security, and joy instead of trusting my savior to provide that for me.

So, I had to lay down my diet books, my straightening iron, and my Spanx in surrender and confess to my Savior the err of my ways. I had to admit the ways I had looked to men (and women) to acknowledge my value through my appearance instead of accepting as enough the acceptance, love, and affirmation he had already given me through his sacrifice. 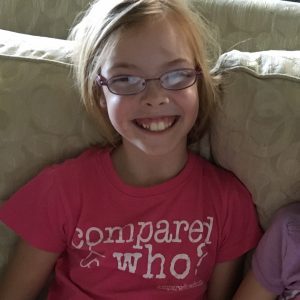 I had to repent of the ways I had made beauty my treasure instead of Jesus.

His offer of freedom from my body image issues never included looking in the mirror and loving my body more. Instead, his desire was for me to look up and love him more.

This is the kind of freedom I want for my daughter, too. Not that she will always be able to smile at herself in the mirror or love her skin even during seasons when hormones take their toll. Rather that she will know culture’s standard of beauty doesn’t fulfill its promise, but Jesus will.

She’s eight now. Her hair seems to get less red with every hour spent in the summer sun. She’s taller than many of her friends, especially the boys, but seems content with that rank. She doesn’t want to wear last year’s tankini because a quarter inch of her belly sticks out when she raises her arms over her head. I gladly told her we’d go buy a new one that covered her whole stomach.

She still prefers to wear a dress to dinner on Friday nights, mostly because her mother won’t let her wear “good clothes” around the house. But, she seems to care less as to whether or not anyone comments on how pretty she looks.

We have a long way to go. I watch friends with teenage daughters and I feel panic creep into my heart at the thought of battling over what skirt length is modest or how much make-up is too much. But, I’m thankful that God set me on a path to freedom. And, I know that ultimately, nothing I can say or not say to her will be as important as the example I set for her in this arena.

Actions speak louder than words if you want to help your daughter with body image. 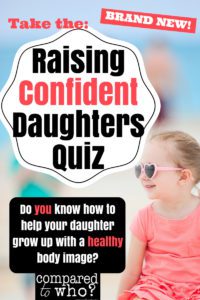 Are YOU raising a confident daughter? How are you doing in the quest to help your daughter with body image? Take the quiz after you subscribe below! (Link will be in email you receive after subscription is confirmed! 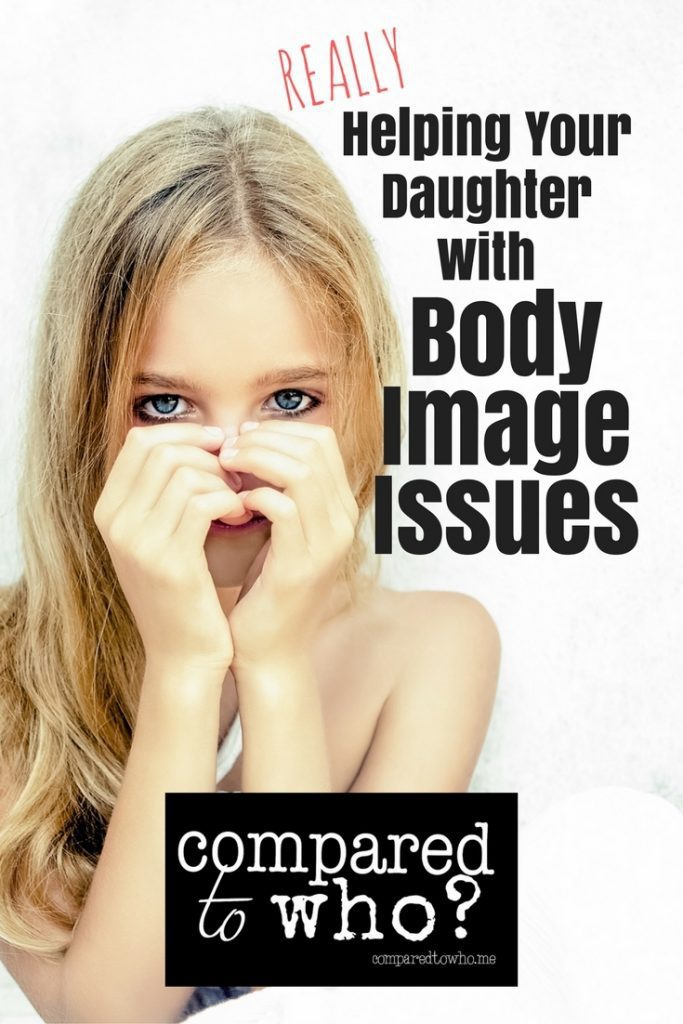