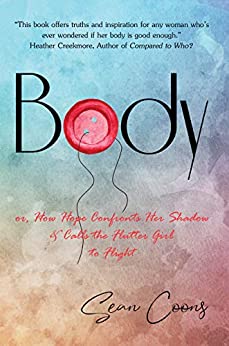 Hope is deep into the journey of the hero--she just doesn't know it yet. She loves her family, HATES her body, and fools herself into thinking all will turn out well in the end--that is until her latest attempt at a crash diet unleashes mayhem in her life. Enter Joy, a quirky spiritual mentor driven by a mysterious past. She offers not an elixir of man, but Truth from above--ancient secrets revealed in steps leading back to the ultimate source of identity Hope so desperately needs to achieve harmony between her body and mind.

Order Now!
About the Book

Listen to my interview with Sean Coons here.

A movement is coalescing in reaction against the unrealistic body image promoted by the entertainment and weight loss industries. Figures such as Oprah Winfrey, Christy Harrison (author of Anti-Diet), and Taryn Brumfitt (Body Image Movement) are garnering mass media attention exposing body-shaming as a cultural toxin–one that is leading to eating disorders and other mental illnesses for younger and younger people. Body takes this message one step further by offering a path to reset body image and establish a body-respecting approach to intuitive eating, exercise, and spiritual living.

Body is a humorous novel, but it is also a self-help guide: By learning from the three women in this story–one in her teens, one in her mid-thirties, and one in her mid-fifties–readers can see themselves, explore their relationships with their bodies, and begin their own journeys to healthy eating and body image by following the seven principles laid out in the story.

Read this book, and you will never see your body the same again.

Sign up for Updates
Preview
Disclosure of Material Connection: Some of the links in the page above are "affiliate links." This means if you click on the link and purchase the item, I will receive an affiliate commission. I am disclosing this in accordance with the Federal Trade Commission's 16 CFR, Part 255: "Guides Concerning the Use of Endorsements and Testimonials in Advertising."